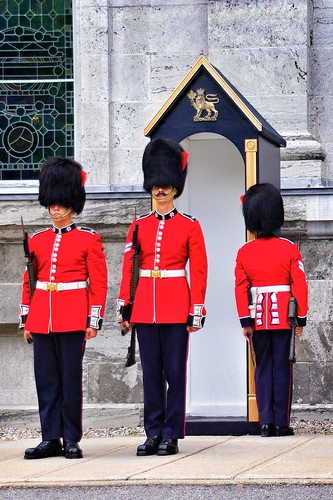 It is easy to love your country. The messages encouraging patriotism are everywhere. And it fulfills a need to belong. But nationalism in our foreign policy is a major obstacle to a more just world.

Reaction to the recent United Nations Security Council vote and opposition campaign highlights "Team Canada" thinking among progressives. Some on the left seemed to fear being viewed as unpatriotic, others simply ignore their country's imperialism and still others actually believe the "world needs more Canada".

Canada's leading proponent of UN peacekeeping offers a stark example of how nationalism stunts common sense. For more than a decade Walter Dorn has fervently promoted military engagement through the UN. As the Rideau Institute adviser and stalwart in the peace movement recognized, far more Irish soldiers were part of UN missions than Canadians while there were slightly more Norwegians. Still, Dorn bemoaned Canada's Security Council defeat to Norway and Ireland. But, if your central political objective is promoting peacekeeping and the other candidates vying for the two Western Europe Security Council positions are more engaged in UN missions, what's to lament? In fact, Dorn ought to celebrate Ethiopia, Rwanda and Bangladesh's foreign policy since they are the top contributors to UN peacekeeping. But, he's too Canadian/Euro centric to countenance such a thing.

Even some prominent pro-Palestinian activists refused to sign an open letter calling on countries to vote for Norway and Ireland instead of Canada due to its anti-Palestinian positions. According to research compiled by Karen Rodman of Just Peace Advocates, since 2000 Canada has voted against 166 General Assembly resolutions critical of Israel's treatment of Palestinians. Ireland and Norway haven't voted against any of these resolutions. Additionally, Ireland and Norway have voted yes 251 and 249 times respectively on resolutions related to Palestinian rights during this period. Canada has managed 87 yes votes, but only two since 2010.

Representatives of the primary victims of the Canadian state also engage in crass foreign policy nationalism. On the day of the UN Security Council vote Assembly of First Nations national chief Perry Bellegarde tweeted, "First Nations consider the work of the United Nations vital for global peace and security. Canada is an important voice to be heard at the United Nations Security Council. Good luck to minister Champagne and ambassador Blanchard on today's vote!"

Bellegarde is an accommodating indigenous leader and the AFN is highly dependent on the federal government. But, as I detail in Left, Right: Marching to the Beat of Imperial Canada, it's not uncommon for First Nations leaders to make similar statements. In a January Georgia Straight commentary titled "Canada must stop violating Indigenous human rights for megaprojects" Grand Chief Stewart Phillip (co)wrote, "for generations, Canada has proudly supported human rights on the international stage at the United Nations forums while consistently failing to apply the same moral compass here at home." According to this formulation, the state that bulldozes First Nations suddenly becomes a social justice seeking force when it operates in a sphere where it faces even fewer democratic constraints. It's an absurd proposition, but not uncommon in Canadian political culture.

Another slightly less direct, though equally bizarre, form of nationalism can be found among strains of anarchism. Many who say they oppose borders and KKKanada were indifferent to the anti-Security Council campaign/defeat and Canadian imperialism more generally. No Borders Media provides a stark example. One would presume a group with such a name would take internationalism seriously. But a look through months of No Borders Media's Twitter demonstrates complete Canada/US centrism. At what point, to paraphrase a slogan making the rounds, does 'silence regarding Canadian imperialism become violence' towards its largely black and brown victims?

One success of the No Canada on Security Council campaign was that it challenged foreign policy nationalism without pretense. It focused on Canada's dubious record and suggested its Security Council competitors were more deserving of a seat on the international organization's most powerful decision-making body. If you care about climate disturbances support Ireland and Norway because their per capita greenhouse gas emissions are far lower; if you care about Palestinian rights back those two countries since they don't vote against UN resolutions upholding Palestinian rights; if you oppose rich countries dumping their trash in poor nations support Ireland and Norway because they signed the Basel Ban Amendment, etc.

Canadian foreign policy nationalism needs to be named and challenged. It is an obstacle to building a more just world.