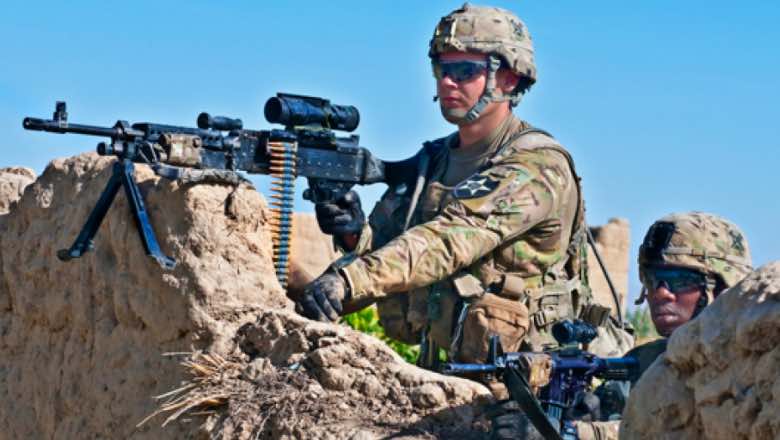 It's 1-2-3 what are they fighting for? 20 years on, US troops are stuck in Afghanistan (US Army photo)
(Image by US Army/Dept. of Defense)   Details   DMCA

The US War in or onAfghanistan has rightly been called the "Forever War."

Launched on October 7, 2001, while the ruins of the World Trade Center were still smoldering from the 9/11 attacks five weeks earlier, the war is now in its 19th year, making it almost nine years longer than the Vietnam War.

And yet, over the years, almost any time a president has attempted to ratchet down the war, or to talk about ending it while that may have been a popular desire among the American people the media, conservative and liberal alike, have started talking about how such a thing would be "premature," or would lead to disaster with the Taliban moving back into power (see FAIR.org: 1/31/19, 9/11/19 and Extra magazine 7/11, 9/11).

Now that the just-defeated President Donald Trump, heading out of office on January 20, is trying to make good on his campaign promise to end the US war in that impoverished and long-suffering "graveyard of empires," he too is being accused of being somehow precipitous for proposing the withdrawal of US troops from Afghanistan.

On Wednesday, October 7, Trump tweeted a message promising to have all 5,000 "BRAVE Men and Women serving in Afghanistan home by Christmas."

After all these years, and considering the small number of US forces still in that country (after first raising the number of troops in Afghanistan from 8,500 when he took office to 14,000 in 2017, Trump has reduced the number of troops there from 13,000 in October 2019 to 5,000 at the end of this November, a record that could hardly be called "precipitous" by any definition!), it might seem like a long overdue move, especially coming from a president who ran for office vowing to end America's "ridiculous endless wars."

But to look at most media reaction, you'd think Trump was FDR saying he was pulling US forces out of France and Italy in the middle of the final assault on the Nazi Wehrmacht.

The media went on the attack against his proposed withdrawal almost instantly.

Related Topic(s): Afghanistan Pullout; Afghanistan War; Endless War; Media Complicity; Media Mainstream MSM; Trump, Add Tags
Add to My Group(s)
Go To Commenting
The views expressed herein are the sole responsibility of the author and do not necessarily reflect those of this website or its editors.