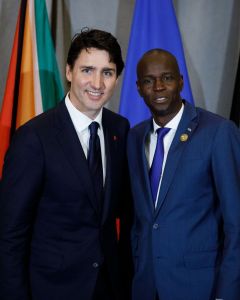 It appears that, in Haiti, Black lives do not matter much to the Canadian government.

On Wednesday the prime minister called President Jovenel Moïse and "underscored the strong friendship between Canada and Haiti." This is the latest instance of diplomatic support by the Liberals for a repressive, corrupt and illegitimate president who has faced massive popular protests. In April 2018 Trudeau met Moïse at the Summit of the Americas and Moïse's Prime Minister Jean Henry Ceant in Ottawa in December 2018. According to the post-meeting press release, Trudeau "took the opportunity to convey his support for current efforts of the Haitian government to promote political dialogue."

In January 2017 foreign affairs minister Ste'phane Dion and international development minister Marie-Claude Bibeau "warmly congratulated Jovenel Moïse on his election" and declared it "essential that the Haitian political actors respect the definitive results of the presidential election." But, the president's claim to legitimacy is paper-thin. Moïse assumed the job through voter suppression and electoral fraud. Barely one in five eligible voters took part in the 2016 presidential election and, even according to official figures, Moïse only received 600,000 votes in a country of over 10 million.

Amidst mass protests Canadian officials put out a stream of statements defending Moïse. In November 2018 Bibeau" declared a desire to "come to the aid" of the Haitian government and three months later she attacked the popular revolt. When asked by TVA "the demonstrators demand the resignation of the president. What is Canada's position on this issue?" Bibeau responded, "the violence must stop; we will not come to a solution in this way." But, the violence was overwhelmingly meted it out by the Canadian-backed regime.

Canadian officials have all but ignored the regime's violence. The day after Trudeau talked with Moïse, US Congresswoman Maxine Waters sent a letter to the US ambassador in Haiti drawing attention to recent killings in the Port-au-Prince slum of Cite' Soleil. On May 28 the Chair of the House Financial Services Committee wrote: "I am especially disturbed by reports that a death squad headed by Jimmy Cherizier, commonly known as 'Barbecue,' accompanied by three Haitian National Police armored personnel carriers invaded Cite' Soleil Tuesday, burning houses and killing people. This violent attack reportedly follows violent attacks in the impoverished Port-au-Prince neighborhoods of Tokyo, Delmas, and Pont-Rouge over the previous two days, in which police officers allied with Cherizier stood by while houses were burned, and people were killed. These reports, if true, represent an outrageous and appalling escalation of politically motivated violence against the people of Haiti."

During the popular uprising between July 2018 and November 2019 the police killed dozens, probably over 100. Videos of police beating protesters, violently arresting individuals and firing live ammunition during protests circulated widely. Amidst a month-long general strike at the end of October 2019 Amnesty International reported, "during six weeks of anti-government protests " at least 35 people were killed, with national police implicated in many of the deaths." A UN report confirmed government involvement in a massacre that left at least 26, and possibly as many as 71, dead in the Port-au-Prince neighborhood of La Saline in mid-November 2018. Residents said men in police uniforms began the killing. A year later 15 people were massacred in a nearby slum, reported the Institute for Justice and Democracy in Haiti, "in politically backed gang attacks intended to force residents of Bel-Air to remove protest barricades."

The Liberals have supported the violent suppression of the popular will in Haiti. The Trudeau government has continued a two-decade old Canadian policy of undercutting Haitian democracy.