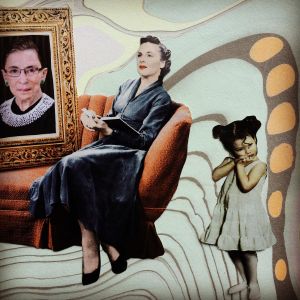 Justice for All
(Image by Akemi Ohira)   Details   DMCA
Don't let it be forgot that in November 2019, the gauntlet of American Exceptionism, gender equality and justice for all, was the prize in a tug-of-war between calculating presidential puppets and a Constitutional Carpe Diem.

What happened to make so many knowledgeable career government officials need to define real American patriotism on national television and make Americans uncomfortable with the dishonesty under our skin?

For whom is Impeachment really And can it purge our sins?

When did our American Dream reality begin its nightmarish transformation with sixties assassinations?

Where did America slip into the simmering pot of Dissociative Identity Disorder? Was it an April 1861 attack? And why didn't we realize we had come to a multiple personality disorder boil before Tuesday 8 November 2016?

Whether Diplomats testifying before Congress inspire pride in how far our truth has progressed, or incite worry that White Supremacy will never be normal in America, our character traits are exposed to friend and foe alike - and like caging children, injected into America's DNA, for our children .

Why did it happen? Was it too much vain complacency after WWII success or when non-Caucasian Jonnies come marching home, again were reclassified, from, Over There, to Jim Crow fodder over here?

How did it happen? Failed 1935 plotting anti-democracy money changers reinvigorated by April 1945 stroke of luck, plotted anew: Military Industrial Complex coup or did our collective and individual strategy for character, simply, like Cheney, have other priorities?

Our American life experiences are overloading on internalized disinformation just when we need each other and color, more persuasion than coercion, more visionary compromise than cookie-cutter talking points.

Now to recapture our abandoned art of communication, our capacity to be inviting, and willingness to not merely hear, but listen intently to each other - rather than Russian hackers, Putin trolls and high placed carnival barkers hijacking our highest places in the heart.

Will a kinder universe, aid and abet the resurrection of our talent for civil debate, so essential to our nation's survival?

Perhaps if we weren't so completely convinced, what we know, do and live is best for, one size fits all, we wouldn't elect to swing from extreme to extreme.

The chink in self-serving armor, however, is historical: most pre-WWII Germans were good citizens, indeed good people, who happened to be mesmerized by someone so captivatingly charismatic, their sense of being betrayed by the Treaty of Versailles, and their hero worship twisted them into inescapable accessories to massive death and destruction.

One WWII lesson is, millions of mostly young Americans died so we would never succumb to the fear fueled hate that breeds a blind desire for revenge, assuaged only by oppressively dominating others.

At the end of each day, do we really believe Putin could hack our 2016 election without being Gerrymandered assisted by American voter suppression?

Where do we go from here, losing our temper in backyard bigotry, Town-hall brawls, school murders? Do we choose the path of Jim Jordan or former National Security Council senior director, Fiona Hill? Just how best do we demonstrate patriotism?