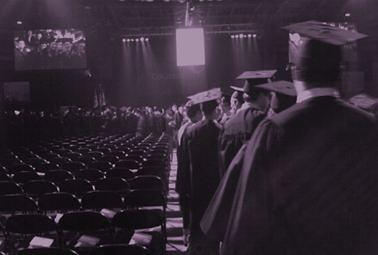 Many college graduates around the country threw their mortarboards into the air and left commencement ceremonies last weekend wondering what the world holds for them. I was one of those college graduates.

Four years I studied Film/Video at Columbia College in Chicago. Four years I spent working toward the point where I would leave the friendly south Loop campus in Chicago and embark on a path into a future that it is more unknown than any future I have embarked into in my life. And, until a few weeks ago, I had no idea where I would be beginning life after college.

I'm in a situation that most graduates (depending on what career they were in pursuit of) find themselves in: How long will I cling to my dream before I let financial realities force me into choosing a job with a much better job outlook? How long do I commit to doing something I am passionate about before I sell out and just do something to get by?

All graduates heard some semblance of a commencement speech from an honoree as they were graduating. Luckily, I didn't have to hear David Souter, Anderson Cooper, Governor Arnold Schwarzenegger, Gen. David Petraeus, Jamie Dimon, or any other person whose integrity to offer sound advice might have been questionable (especially if they didn't properly confront cultural, social and political realities they had helped create in their speech).

No, the commencement ceremony I walked in had comedian, singer, writer and actor Robert Klein speak as the honoree.

Kevin Gosztola is managing editor of Shadowproof Press. He also produces and co-hosts the weekly podcast, "Unauthorized Disclosure." He was an editor for OpEdNews.com
Related Topic(s): Artists; College; Comedy; Commencement; Creativity; Creativity; Graduation; Internet; Life-Home-Family; Media; (more...) Music; Radio; School; Student Loans; Students-Youth, Add Tags  (less...)
Add to My Group(s)
Go To Commenting
The views expressed herein are the sole responsibility of the author and do not necessarily reflect those of this website or its editors.