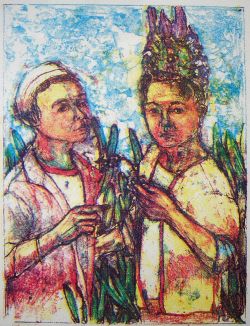 Trust Lost Rarely Returns
(Image by Akemi Ohira)   Details   DMCA
Favorably impressed by Senators Rand Paul and Joe Manchin; cajoled by the opportunistic scalawags Ted Cruz and Josh Hawley; hoodwinked by delinquents Devin Nunes and Trey Gowdy, then you are likely dangerously close to having your common sense sheared by the fork tongued grand master of hypocrisy and deceit, whose every well-oiled syllable is calculated to cannibalize the citizenry's power of reason, while soiling the very mantle of Statesmanship: Mitch McConnell.

When every Republican Senator voted, No to helping Americans, while knowing the truth: the oft touted superior USA Education system, reliable Infrastructure and dependable power grids were myths long before COVID, but are now frigidly exposed by the corroded commitment our chosen arrogance filled human demi-tasses, led by a Commander-in-moral bankruptcy, ranting tomfoolery sermons, waving the white supremacist flag of supreme violence when sore from losing - all while departing in the opposite direction of his directed target, anticipating celebrating in the safely of his Fuhrerbunker among inner circle of self-deceived Automatons.

In lieu of the character to concede, the Putin pretender replays his ditty: the art of the deal, dealing democracy decay, by denying defenders under siege, defenders.

Proudly, the vessels of fear programmed by the hateful venom of bushwhackers, deteriorated democracy 20 January 2017 to 6 January 2021, contradicting the human value of workers essential to America's stability, while keeping their oath to prevent Constitutional elections and Medical Healthcare personnel from keeping theirs, despite a global pandemic.

Republicans claim they're the party for small businesses, yet after forcing them to close and loose income to save lives from COVID variants, they are sacrificed within the Conservative mantra of, it's too expensive to care, believing our taxes are Congressional private slush fund.

Remaining unmasked, in lockstep with their current favorite son, evidently still believing, one day, like a miracle, it will just disappear, the GOP averts its eyes from a half million Americans dying alone.

In callous alignment with ex-presidential hoax, senators Graham-SC, Gaetz-Fla, Gosar-Ariz, Brooks-Ala and Ron Johnson-Wis, wipe their ill-gotten gain on our Constitution, accepting no shame for themselves. Such men dishonor their oath of office and country - for true patriots don't lie for traitors who incite scoundrels to beat Capitol Police, Asian Americans or attempt to hang a sitting Vice-President or believing Black lives never mattered, protect those who randomly kill them.

When Conservative is now defined by our current Congress and Red State Legislatures attempting to limit our American privilege to vote, and further by extremists invading our military and police forces, how in the wake of events between 3 November 2020 and 6 January 2021, are we to entrust our economy, healthcare and children's Climate Change future with elected leaders unwilling to condemn violence against our Constitutional law in the land of opportunity?

Until we recapture our connective roots with a thriving Middle Class, we will not be able to scale the rubican separating militants believing in Corporatism's financially rented might is right, and patriotic self-sacrificing Samaritans working multiple shifts as essential first responders all across America - living with the trauma and potential of losing another grocery store shelf stocker, bank teller, tutor, doctor, nurse, significant other, veteran, teacher, student, friend, grand-parent, family member or patient.

Those, whether by acclamation, consenting silence or glazed over by redundant media who actively or passively stand back and stand by, while the malice aforethought of proud boys and girls, QAnon and Faustian oath keepers heap death upon Americans - are accessories sharing an enormous portion of the treasonous responsibility for the misinformation, economic desperation and anti-democracy insurrection heaped upon the innocent, courageous and patriotic souls who understand that:

· Teargassing a peaceful BLM protest for a Bible Photo Op is not grounds for Sainthood.

· It is neither patriotic nor is there any Glory in using Old Glory to attack Capitol Police.

· Those who deem themselves superior to any other human being for reasons of color, gender, sex, religious beliefs or income are paranoid.

· All who commit violence proclaiming it an act of loving God and Country are simply traitors in spirit and fact to Lincoln's Gettysburg Address and America's Constitution - particularly its Bill of Rights and 14th Amendment.

So, let us now reaffirm, we hold these truths to be self-evident:

· All of us are created equally deserving of life, liberty and the pursuit of happiness, as long as we do not infringe on the Constitutional rights of others through harassment, intimidation or violent acts.