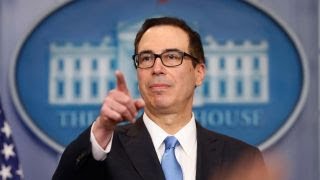 One of the most dangerous consequences of this awful period in American life is the denigration of the truth, and of institutions and people who tell it.

Trump is both, because he doesn't even care enough about the truth to find out what it is. He'll say whatever he thinks will get people to believe what he wants them to believe.

What about people like Treasury Secretary Steve Mnuchin, Trump's point person on the Republican tax bills now making their way through Congress?

Mnuchin continues to insist that they put a higher tax burden on people earning more than $1 million a year, and reduce taxes on everyone else. "I can tell you that virtually everybody in the middle class will get a tax cut, and will get a significant tax cut," Mnuchin says repeatedly.

But the prestigious Tax Policy Center concludes that by 2025, almost all of the benefits of both bills will have gone to the richest 1 percent, while upper-middle-class payers will pay higher taxes and those at the lower levels will receive only modest benefits.

So is Mnuchin a fool? His career before he became Treasury Secretary doesn't suggest so. He graduated from Yale, and worked 17 years for investment bank Goldman Sachs.

In the age of Trump, even prestigious organizations once considered non-partisan are either "with us" or "against us."

Problem is, virtually all other studies by every other source show the House and Senate tax bills overwhelmingly benefit the rich and, within a few years, harm the middle class.

Even Congress's own Joint Committee on Taxation -- the House and Senate's official scorekeeper on tax issues -- finds that the Senate's version of the bill would increase taxes on all income groups making under $75,000 per year.

By 2027, it would give its biggest tax breaks to those making $1 million or more. The House bill would be even more generous to millionaires and billionaires.

Mnuchin's response? He has none. He just keeps repeating the same lie.

Mnuchin also maintains that the Senate and House tax plans won't cause the federal deficit to rise. "This isn't about the deficit," he said recently. "We'll create economic growth to pay down the deficit."

Related Topic(s): Athletes; Fools; Integrity; Lies; Taxes, Add Tags
Add to My Group(s)
Go To Commenting
The views expressed herein are the sole responsibility of the author and do not necessarily reflect those of this website or its editors.