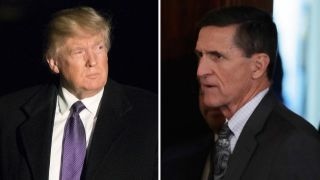 Just three weeks into the Trump presidency, and his political enemies in the Washington establishment have scored big, with the forced resignation of Trump's National Security advisor Michael Flynn. The establishment includes state intelligence agencies and aligned corporate news media, who have been gunning for Trump ever since his shock election last November.

It's a hugely damaging blow to the inner circle of the Trump White House. The US media reporting on Flynn's resignation this week had the unmistakable air of victory-crowing. Like sharks in a pool, they smell blood.

Flynn had to go after the Washington Post and others reported that he wasn't telling the truth about phone calls he had been holding with Russian ambassador Sergey Kislyak during the transition to the Trump administration. Flynn hadn't denied the calls in late December, but he had maintained that the subject of US sanctions on Russia were not discussed.

Persistently the US media did not give up on the charges against Flynn, which shows that their confidence on the subject was underwritten by intelligence sources. Or put another way, this was an intelligence-led witch-hunt which was based on the illegal disclosure of private information.

Flynn had told the US Vice President Mike Pence that sanctions were not discussed and that the conversation with the Russian diplomat was only about seasonal pleasantries and making arrangements about a forthcoming phone call between President Trump and Russian counterpart Vladimir Putin -- that call was finally made on January 28.

Pence stood by Flynn initially, telling media outlets that there was nothing untoward in the phone calls.

Legally, a private US citizen -- which Flynn was at that stage before Trump became inaugurated on January 10 -- is not permitted to talk about government policy with a foreign state in a presumptive official capacity.

Apparently now, as it turns out, sanctions were discussed between Flynn and Kislyak, according to FBI investigators and US officials quoted by the Washington Post. Russia has refused to comment on the nature of the phone calls.

What was Flynn thinking of? At one stage during the Obama administration, he had served as head of the Defense Intelligence Agency -- one of the 16 US federal spy organizations. It seems incredible that given his expertise in matters of US state surveillance practice, Flynn could have been so reckless as to hold phone conversations with Russia's top diplomat in Washington on national security issues outside of his then remit.

Especially considering too that Flynn was shortly about to assume office as a senior national security adviser to the new president, Donald Trump, who was already under intense media scrutiny over his alleged links to Russia.

Not only hold phone conversations, but as seems likely, Flynn broached the subject of how US sanctions levied by Obama might be lifted under the Trump administration. For Flynn not to realize that every word would be tapped by US intelligence seems an incredible lapse of judgment on his part.

The suspect phone contact occurred at the time Obama sanctioned several Russian diplomats over allegations that Russian hackers had interfered in the presidential elections. Those allegations of Russian state-sponsored hacking have never been proven.

The way the Washington Post tells it, US intelligence officials were surprised when Russian President Vladimir Putin did not reciprocate with Obama's sanctions announced on December 29, instead choosing to respond by wishing Americans a Happy Christmas.

According to the Post, US intelligence began searching for a possible explanation for Putin's unexpected response, and they found their putative answer in Flynn's call to the Russian ambassador. It is claimed that Flynn indicated to the Russian diplomat that the new sanctions imposed by the outgoing Obama administration would be duly reversed by Trump.

Related Topic(s): CIA; Michael Flynn; NSA; Trump Presidency; Vladimir Putin, Add Tags
Add to My Group(s)
Go To Commenting
The views expressed herein are the sole responsibility of the author and do not necessarily reflect those of this website or its editors.