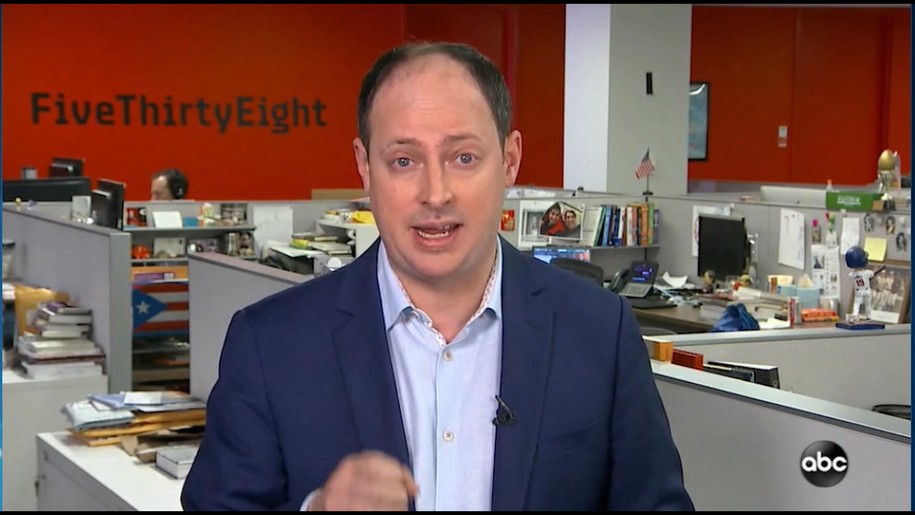 The media has been trying to will Joe Biden as the undisputed favorite since his entry to the Democratic Primary. FiveThirtyEight.com's Nate Siver's analysis should dispel that fallacy. Did he project an easier path for Bernie Sanders or Elizabeth Warren?

It is surprising to see Nate Silver appear on the mainstream media, and articulate, however so gently, that Joe Biden is likely done. To be clear, he never said that. But he did say that if Biden wins Iowa, he stood an 80% chance of winning the Democratic Primary. If he fails to win Iowa, his chances drop to 20%, lower than Bernie Sanders' current probability of winning which stands at 22%.

Even as the media has ignored or misreported on Bernie Sanders' campaign and its true impact, even as they have been propping up Joe, Biden is unable to clear himself from the field. In fact, the opposite is true.

It is great that there is a solid percentage of Americans that will not allow scare tactics to work. The false electability metric as the campaign continues should hold less value given that the one thing that has been proven over and over again is that the Democratic Establishment short of one exceptional candidate like Barack Obama has a poor electability record. But hold up. Did they not say that a black guy with a funny name, a Muslim name, couldn't win. Of course, he won with what at that time was the largest popular vote.

This is the time for transformational change, not incremental change that is generally rolled back incrementally. Obamacare is probative. It is time that we ensure that the candidate that will represent most of us will demand and create the policies that we must have. They are becoming existential. We need Medicare for All and the Green New Deal. No ifs or buts.

Egberto Willies is a political activist, author, political blogger, radio show host, business owner, software developer, web designer, and mechanical engineer in Kingwood, TX. Egberto is an ardent Liberal that believes tolerance is essential. His favorite phrase is "political involvement should be a requirement for citizenship". He believes that we must get away from the current policies that reward those who simply move money/capital and produce nothing tangible for our society. If a change in policy does not occur, America will be no different than many oligarchic societies where a few are able to accumulate wealth while (more...)
Related Topic(s): Nate Silver, Add Tags
Add to My Group(s)
Go To Commenting
The views expressed herein are the sole responsibility of the author and do not necessarily reflect those of this website or its editors.