"Six gay men arrested alledgedly to protect them from a rampaging mob in Mombasa, Kenya are to be charged with 'having unnatural sex against the order of nature' and subjected to medical examinations.

A riot started on Friday following a report in Kenya's newspaper The Daily Nation, and subsequent radio reports, of a supposed 'gay wedding' at Mtwapa, a Indian Ocean beach resort, north-east of Kenya's second city.

Kenyan gay activists say the newspaper report was based on "rumors started in a hair salon" following a practical joke and that there never was a planned 'wedding'. GayUganda reports receiving email saying that "one of our Guys made a joke last week that he was getting married to his lover, this issue has been picked by Radio Rahma and it's inciting Muslims against Gay men".

Updated Monday from this point: Kenyan Human Rights activists from the groups PeaceMaker (PEMA) and Stay Alive have researched on the ground and say:


The most repeated version is that about two weeks ago a well known and popular gay man in the Mtwapa area [16km north of Mombasa], went to the barbershop for a haircut. When one of the barbers commented that his hair looked really nice and asked him where he was going, he responded JOKINGLY that he was going to get married.

However the barber took it seriously and went to his local mosque and reported that there was a planned gay wedding set for Friday February 12th in Mtwapa. The Imam then made an announcement in the mosque that this was going to happen and instructed the congregation to start monitoring any community gatherings to ensure that there were no gay weddings. 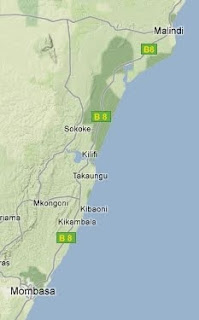 As a result of ensuing radio coverage a local councilor in Mnarani near Kilifi (between Malindi and Mombasa) organised a demonstration against homosexuality for Monday Feb 8 and the KEMRI research center in Kilifi which is a centre for HIV/AIDS prevention and treatment. KEMRI heard about this and asked the councilor to cancel the demonstration, which it was.

However on the Thursday local media as well as the BBC reporter Odhiambo Joseph went to KEMRI to ask about the gay wedding, supposedly to be held at a beach resort on the Saturday. They were told there was no wedding.

Activists claim that all week presenters on the radio stations Kaya and Baraka FM had been inciting people, with Radio Rahama asking Muslims to "find these men".

On the Friday The Daily Nation published interviews with local clerics from the Council of Imams and Preachers of Kenya (CIPK) and the National Council of Churches of Kenya (NCCK) who'd called at a press conference the previous day on the government to "vet all nightclubs in the town and close down those found promoting to gay activities."

Said Bishop Laurence Chai, described as the leader of 'Operation Gays Out': "We thank God for saving this town from being turned to Sodom and Gomorra of this era as we may be on verge of being doomed had this criminals managed to conduct their evil exercise within our neighbourhood."

He claimed that gay couples from Western countries would be amongst guests at the supposed wedding, said that youths were being 'recruited' into gay clubs and that "god is about to punish the fastest growing town in Coast region".

The clerics specifically warned the owner of a building which acts as a safe house for gay men. They called for the closure of KEMRI: "how can a state institution be involved on the pretext of providing counseling
services to these criminals". (KEMRI provides care and treatment to all community members including men who have sex with men (MSM)).

DaveyS is a 5th-generation Texan now living in California, a proud liberal (product of the public education system in North Texas!), and a staunch critic of conservative policies that are destroying our nation.

Related Topic(s): Arrest; Media; Rights; Sex, Add Tags
Add to My Group(s)
Go To Commenting
The views expressed herein are the sole responsibility of the author and do not necessarily reflect those of this website or its editors.

Brasscheck TV.com shows us the real truth of what we are up against.

Why We Should Fly Naked This Thanksgiving.