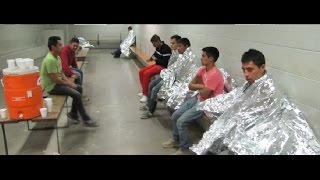 Five people died and several more were injured near the US-Mexico border Sunday when US Customs and Border Protection (CBP) and local police pursued a car full of immigrants at speeds of over 100 miles per hour. The driver of the large SUV carrying 12 immigrants lost control and flipped several times, throwing bodies across Highway 85 in Big Wells, Texas, 50 miles north of the border.

With body bags and the charred remains of the SUV nearby, Dimmit County Sheriff Marion Boyd told the press that the pursuit was "good police work" and called for the construction of a wall along the US-Mexico border. Immigrants, he said, are a "real problem."

The crash is the latest link in a chain of escalating violence perpetrated by the government against immigrants both at the border and in the interior of the US. Yesterday was Father's Day and some 2,000 immigrant children spent the day locked up in detention centers where they have been detained after being separated from both parents as part of the "zero tolerance" policy carried out by the Trump administration since May.

Many of these children are being held at a tent city on a military base near El Paso, Texas. Beginning Tuesday, temperatures at the internment camp are forecast to be above 100 degrees for at least 10 days.

A rapid intensification of anti-immigrant measures is underway across the country. Reports surfaced over the weekend that a bus driver in Maine told riders they had to be US citizens to travel while a CBP officer stood by and asked travelers whether they were citizens.

In Southern California, an African-American passenger yelled at fellow travelers that they did not need to turn over their papers when a CBP agent boarded and asked passengers for identification. The officer then left. The woman, Tiana Smalls, wrote on Facebook:

"These border patrol officers act like they do because they EXPECT people to be afraid of them and just comply. The lady next to me spoke NO ENGLISH, but she was a very kind woman. She looked TERRIFIED when they boarded. I felt it was my duty to defend her. We DO NOT LIVE in Nazi Germany. No one should be asked to present 'papers' for interstate travel. I defended her, and I defended myself. We DO NOT HAVE to just take this s--- LYING down."

Detentions and arrests continue at a record pace across the US. Sandra Chica, the wife of Ecuadoran immigrant Pablo Villavicencio, published an op-ed in Sunday's New York Daily News appealing for support. Villavicencio was detained by Immigration and Customs Enforcement (ICE) two weeks ago after delivering pizza to a soldier on a military base in New York who reported him to immigration authorities.

"Today is Father's Day, and this is the first time my two little girls will spend it without their father," Chica's open letter reads. "They made handwritten cards and drawings telling him how much they love him, but sadly they won't be able to give them to him.

"I have visited Pablo a few times at the Hudson County jail. Pablo describes a scene where individuals are deported daily. Like him, many of these people came to this country to provide a better life for their families. It is shocking that a government can behave like this and separate loved ones. ...

"When Pablo speaks to our daughters over the phone, we cry. The pain of being ripped away from our family is unspeakable. ...

"On Wednesday, our oldest daughter will celebrate her fourth birthday. Pablo will likely not be there, and she'll be wondering why. I'm sure that all fathers reading this can imagine the pain they'd feel missing these important days with their beautiful children."

Former top White House aide Stephen Bannon defended the Trump administration's attacks on immigrants on ABC's "This Week" interview program on Sunday. "I don't think you have to justify it," he said, referencing the separation of thousands of children from their families. "We have a crisis on the southern border."

Bannon was given ample airspace to make his fascist appeal. He said that "elites" were conspiring to support immigrants and that "this illegal immigration -- the people that hurt the most are the Hispanic and black working class." Bannon said immigration "suppresses their wages, it destroys their health care, it destroys their school systems."

Related Topic(s): Children; Detention; Immigration; Violence, Add Tags
Add to My Group(s)
Go To Commenting
The views expressed herein are the sole responsibility of the author and do not necessarily reflect those of this website or its editors.