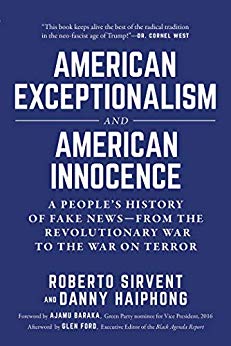 Adherence to American exceptionalism kills the left and then takes it to the Democratic Party-run graveyard for burial.

"The anti-Russian campaign has given the FBI and the CIA a public relations facelift."

Myth One: Trump is the most dangerous force in American politics today

For many on the left, Trump is the anti-thesis of liberal enlightenment. Trump is a racist, a misogynist, and a corrupt billionaire. All of this is true, which is why many Black Americans, liberals, and progressives despise Donald Trump. That's fair. Where the confusion lies is in the dangerous path that the response, or "resistance," to Donald Trump has taken the left. The capitalist oligarchy has been successful in driving fear of Trump into a project of reforming and revitalizing the so-called "exceptional" values and institutions of the U.S. nation-state.

The "resistance" has mainly focused on the Russia-gate conspiracy to render the orange billionaire a dangerous foreign agent whose sponsor, Russia, must be disposed of with as much vigilance as Trump. This narrative ignores the very real continuity between Trump and U.S. imperialism through a psychopathic vilification of Russia. Neither Trump nor Russia created this system. Trump has merely benefitted from systemic stagnation and crisis, first by becoming rich from exploiting workers (as all capitalists do) and then by taking advantage of the political vacuum created by the bipartisan consensus of endless war and austeritya consensus much of the population of the U.S. and the world at large no longer sees as legitimate. Without an alternative to the Democratic Party, the left was unable to muster any challenge to the political crisis engendered by the two-party duopoly. The danger then is not just Trump but rather the entire political establishment which enabled his rise. Viewing Trump as the singular danger of U.S. imperialism is more likely to take the world into nuclear war with Russia than neutralize the orange menace in the White House.

Myth Two: The U.S. is a society where freedom of the press is sacred

The U.S. corporate media is controlled by a handful of corporations with deep investments in the military industrial complex. Yet the corporate media continues to frame itself as the only source of legitimate "journalism." Trump's faux crusade against the corporate media has given the ruling class grounds to wage a war against independent media in the name of stomping out the real "fake news." What is referred to as "fake news" is us, the left. The ruling class has labeled sources such as Black Agenda Reportdupes of Russia and has used Silicon Valley giants such as Facebook and Google to censor left-wing political media and organizations online. While polls continue to show that many Americans do indeed see the corporate media as "fake news," the war on independent media, with Trump and Russia as the proxy, has reinvigorated the narrative that the U.S corporate media represents a "free press." Such a narrative allows the corporate media continues to push for war and austerity while the left is drowned out by actually-existing censorship.

There has been much genuflecting about the condition of Black America and workers generally since Trump came into office. Trump has boasted that his administration deserves credit for reviving the capitalist economy while his opponents in the elite attribute the so-called gains to Obama's administration. Neither is true. While stagnation has stabilized rather than worsened, the condition of Black America and workers in general cannot be viewed from the prism of progress if we consider the realities on the ground. Ninety percent of jobs created during the Obama period were low-wage or temporary . This has not changed under Trump. Black Americans came out of the Obama era with less wealth than prior to the 2007-08 economic crisis as a result of the bailout Obama facilitated to the banks. Black wealth will be zero by 2053 if current trends persist. This does not account for the fact that trends do not consider the periodic crashes of the capitalist system. Furthermore, low unemployment numbers can be attributed to the increase in discouraged workers, or workers no longer looking for jobs, who are not counted in federal unemployment statistics. In other words, progress is in the eye of the beholder, the ruling class, and we must move beyond narratives of progress to see the economic crisis in Black America and the working-class broadly for what it is: ongoing.

The myth that the U.S. "saved the world" in World War II continues to haunt the left in the U.S. Even Alexandria Ocasio-Cortez, the popular "democratic socialist" Congresswoman, has stated on several occasions that the U.S. must rise to the occasion of climate change like it did during World War II. What does this mean, really? The statement assumes that the U.S. defeated fascism in Europe and Asia and brought the world to a more democratic place and peaceful period in world history.

The myth of the "Good War" has made it difficult for even anti-war progressives to question the role of the U.S. in World War II. Forget that the U.S. used two nuclear bombs on Hiroshima and Nagasaki despite evidence from U.S. military officials at the time that their use was wholly unnecessary . Forget the U.S.-U.K. firebombing of Dresden in 1945 which killed 300,000 people; also seen as unnecessary by historians. And forget that the U.S. waited until 1941 to enter the war and saw Hitler as a major asset in weakening the Soviet Union up until that point. Surrounding World War II is a sacred creed of American exceptionalism. Many leftists believe that the "Golden Age" of capitalism which followed the war justifies, or at least makes excusable, the many crimes the U.S. committed in its participation in WWII. But the golden age of capitalism is gone, and we are in the system's late stages. The military industrial complex created during World War II has a large part in leading us to this moment of U.S. imperial decline and we must get real about World War II if we are to develop a strong anti-imperialist movement in the belly of the beast.

Myth Five: Russia is the enemy of the U.S.

Since the 2016 election ended, the Democratic Party and its allies in the U.S. intelligence apparatus have been busy investigating the accusation that Donald Trump "colluded" with Russia to win the presidency. These claims have been debunked again and again by journalists and academics such as The Nation's Aaron Mate and Stephen Cohen . Liberal darling and former FBI director Robert Mueller was appointed to investigate allegations of Russian collusion only to come up empty after over six hundred days of "investigation." Still, the narrative that Trump is at least a dupe of Russia lives on and that's because the whole saga was never about facts in the first place. Russiagate was always a poorly crafted mechanism on the part of the spook agencies in the U.S. to neutralize not only Donald Trump's unpredictable political leanings but those of the left as well.

Related Topic(s): American Empire; American Hegenomy; American Hypocrisy, Add Tags
Add to My Group(s)
Go To Commenting
The views expressed herein are the sole responsibility of the author and do not necessarily reflect those of this website or its editors.