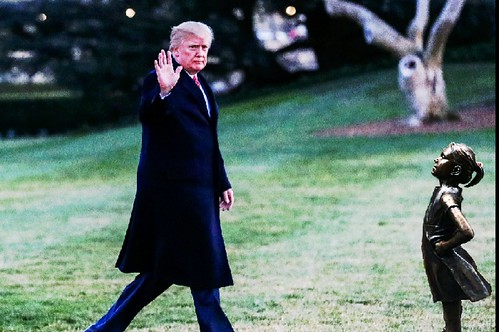 Five months into the Trump regime, we've reached the tipping point. It may take more than a year to play out, but the presidency of Donald Trump is coming to an end. Meantime, congressional Republicans -- acknowledging the Administration is running out of runway -- have decided to ram through as much toxic legislation as they can while Trump is in the White House.

Four factors brought us to this tipping point. The first is Donald Trump's unpopularity. The battle lines have been drawn and there is no neutral ground. The majority of American adults (56 percent according to the 538 website) disapprove of Trump's job performance.

Second, in the face of his historic unpopularity Trump has given up on any notion of broadening his base, of being the President of all the people. There's been no indication that Trump plans any effort at reconciliation between the warring factions in American politics. Instead, Trump has doubled-down on hateful and divisive rhetoric. As a result, an already polarized electorate has become even more deeply divided. Trump doesn't care; he's content talking exclusively to his base while executing an agenda that will, in the longterm, hurt his most dedicated followers.

Third, Trump is in serious legal trouble. There are two separate legal actions wending their way through the legal process. The first regards emoluments and the second collusion with Russia.

An under-reported story is Trump's violation of the Constitution's conflict-of-interest clause ("emoluments"). Writing in the New York Review (http://www.nybooks.com/articles/2017/02/23/donald-trump-is-violating-the-constitution/), ACLU legal director David Cole describes the lawsuit brought by Citizens for Responsibility and Ethics (CREW): "never before in American history has a president-elect presented more conflict of interest questions and foreign entanglements than Donald Trump... Our forty-fifth president has deliberately chosen to undermine the interests of the people he represents in order to further the interests of the one person he cares about most."

Three emoluments lawsuits have been filed. The first by an ethics watchdog (CREW), the second by the attorney generals of D.C. and Maryland, and the latest by 200 Democratic members of Congress. These lawsuits sail into uncharted legal waters and, therefore, it's unclear what their ultimate outcome will be. (Except to harass Trump for many months.)

The collusion with Russia track has gotten more attention and seems more promising. There are three independent investigations: one in the House of Representatives, another in the Senate, and a third conducted by Department of Justice independent prosecutor Robert Mueller. Most observers believe the Mueller investigation represents the biggest threat to Trump -- the caveat being that Donald could end the investigation at any time by firing Mueller.

The collusion with Russia track has four distinct components: the first suggests that Trump has had unsavory financial relationships with Vladimir Putin and his cronies. The background material suggests that Trump has deep ties that he does not want to reveal -- hence his reticence to release his tax returns. Depending upon your perspective, what we know implies that at the worst Trump has been involved in a gigantic money-laundering syndicate and at the best he has displayed incredibly bad judgment.

The second component of the collusion with Russia track suggests that Trump presidential campaign collaborated with Russians to disrupt the 2016 presidential election. Depending upon whom you read, Trump associates either directly coordinated with Russian actors, to take actions such as hacking the DNC emails and distributing them to Wikileaks, or they knew about the Russian activities and did nothing to stop them. (For his part, among the Washington mega-players, Trump has been distinguished by his apparent lack of curiosity about Russia's involvement in the 2016 election.)

Recently, a third component of the collusion with Russia track has emerged: Trump's efforts to coverup the entire matter. This was what made former FBI-director James Comey's testimony so riveting. Comey is convinced that Trump removed him from his post because Donald wanted to shut down the FBI inquiry into collusion with Russia. (Trump, in effect, admitted this in his May 11 interview with NBC's Lester Holt [http://www.nbcnews.com/news/us-news/trump-reveals-he-asked-comey-whether-he-was-under-investigation-n757821 ]).

The fourth component of the collusion with Russia track has been the revelations of what appears to be perjury by Trump associates. Trump confidantes such as Jared Kushner and Michael Flynn apparently lied to authorities when they were initially questioned about their contacts with Russians. While this does not directly bear on Trump it does suggest a broader conspiracy to suppress the truth.

The fourth factor that brought us to this tipping point is the total abandonment of comity in Congress. It wasn't that long ago that Democrats and Republicans worked together on some matters. Those days are gone.

The Senate Republican handling of their effort to repeal and replace Obamacare is illustrative of how the situation has deteriorated. Republicans have made no effort to work with Democrats and have fashioned their Obamacare replacement in secret. They plan to ram it through the Senate with a minimum of discussion.

The good news is that the Trump presidency is headed towards an early termination. The bad news is that the Republican leadership knows this and is determined to ram through as much toxic legislation as they can while Trump is in the White House.

Bob Burnett is a Berkeley writer. In a previous life he was one of the executive founders of Cisco Systems.
Related Topic(s): Congress; Conspiracy; Democrats; Election; Fivethirtyeigh; Obamacare; Presidency; Republican; Senate; Tipping Point, Add Tags
Add to My Group(s)
Go To Commenting
The views expressed herein are the sole responsibility of the author and do not necessarily reflect those of this website or its editors.