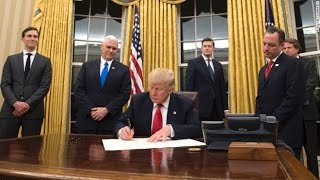 Donald Trump, in what's been hyped as an "unprecedented" move, has instituted a freeze on the hiring of federal employees. Hyperbole aside (it's hardly unprecedented, since Ronald Reagan did the same thing on his first day in office), one thing is already clear: this will hurt a lot of people.

Trump's order exempts military personnel, along with any position that a department or agency head "deems necessary to meet national security or public safety responsibilities." That offers a fair degree of latitude when it comes to filling positions in certain areas.

But Trump's appointees aren't likely to ask for "national security or public safety" exemptions for the many government jobs that help people in ways Republicans despise. So who stands to lose the most under this hiring freeze?

Trump and his advisers seem to have had Social Security in mind when they included this language:

"This hiring freeze applies to all executive departments and agencies regardless of the sources of their operational and programmatic funding ..." (Emphasis mine.)

While there may be other reasons for this verbiage, it effectively targets Social Security, which is entirely self-funded through the contributions of working Americans and their employers.

Social Security is forbidden by law from contributing to the deficit. It has very low administrative overhead and is remarkably cost-efficient when compared to pension programs in the private sector.

That hasn't prevented Republicans in Congress from taking a meat cleaver to Social Security's administrative budget. That has led to increased delays in processing disability applications, longer travel times for recipients as more offices are closed, and longer wait times on the phone and in person.

Social Security pays benefits to retired Americans, disabled Americans, veterans, and children -- all of whom will be hurt by these cuts.

The Department of Labor, especially the Occupational Health and Safety Administration (OSHA), ensures that working Americans are safe on the job. It's a huge task: Nearly 2.9 million Americans were injured on the job in 2015, according to OSHA data, and another 145,000 experienced a work-related illness. 4,836 people died from work-related injuries in 2016. (These numbers count only reported injuries, illnesses, and deaths; not all are reported.)

OSHA's employees study injury and illness patterns, communicate safety practices and rules, and inspect workplaces to make sure that the rules are being followed. This hiring freeze will lead to fewer such studies, communications, and inspections. That means working Americans will pay a price -- in injury, illness, and death.

Related Topic(s): Funding; Trump Hiring Freeze; Trump Presidency, Add Tags
Add to My Group(s)
Go To Commenting
The views expressed herein are the sole responsibility of the author and do not necessarily reflect those of this website or its editors.