I shouldn't have done it, but I couldn't resist the temptation. Sometime in the middle of last year's presidential campaign, I clicked on one of Trump's ever-present popup ads offering me the chance to offer my opinions on the issues facing our country. Under the name of Go F###yourself, I proceeded to tell him that I didn't want the wall built, that defunding the police was an excellent idea and that I didn't think the mainstream media was #FakeNews or a threat to our country. I don't think that he read my responses.

Almost immediately "Go" received his first email thanking him for his "support" and encouraging a donation to the Trump campaign. It was quickly followed by another, and then another. And then still another. It was a constant torrent of appeals from Trump, members of his family, and others within the Trump orbit.

The flood was funny at first as it smelled of desperation, but then the relentless pleas for cash became a nuisance. Checking my email became as exciting as watching PBS during pledge week. I started reporting the emails as spam and, eventually, they stopped clogging my inbox. 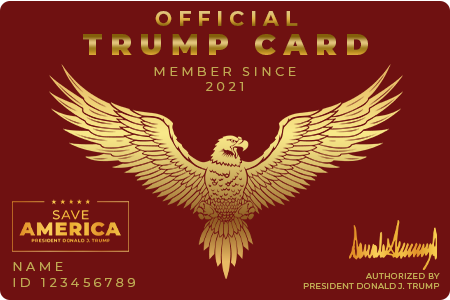 (Image by Save America JFC)   Details   DMCA
Suddenly last month the rains came again. Trump, Jr., and former San Francisco first lady, Kimberly Guilfoyle, all began sending me several emails a day asking me to donate and "Save America." None of them give any indication of what the money will be used for, but if the donation is for $45 or more, "Go" will get his very own Trump Card. It is the least that can be done for one of Trump's "Top Supporters."

The constant barrage of appeals gives a lot of insight into how little Trump thinks of his supporters. Any person with an ounce of common sense knows that Jr. is not writing these emails personally, but the email campaign is rooted in a narrative that the entire Trump family is discussing the supporter around the dinner table as they feast on ketchup smothered steak. The basic message is that the former president was disappointed when "he noticed your name wasn't on" the current list of donors who have recently shown their support. Aren't you supposed to be a patriot?

(Image by Save America JFC)   Details   DMCA
Forget the Art of the Deal, Trump has mastered the great American tradition of televangelism. Instead of asking for retirees' social security checks in exchange for the eternal salvation of their soul, he is offering blue-collar voters a path to patriotism in exchange for $45 and the unquestioned support of your Dear Leader. Never mind the fact that our country was founded on the rejection of devotion to a single man and that our loyalty should be to the Constitution and the rule of law, not a demagogue, especially one who is a twice-impeached, one-term president.

As the demographics of our country change, Trump has found support in those who long for the good ole days when racism, misogyny, and homophobia could be openly displayed without repercussions. He may have lost the White House, but he is still their messenger as shown by the legions who were willing to jettison their moral grounding to support a lie on January 6. Never one to pass on a path to easy money, Trump continues to profit from their angst and fear, one donation at a time.

Related Topic(s): One More Big Trump Lie, Add Tags
Add to My Group(s)
Go To Commenting
The views expressed herein are the sole responsibility of the author and do not necessarily reflect those of this website or its editors.