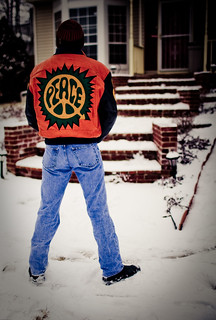 A first step toward peace. There are more steps - and they are slippery, but possible.
(Image by Vox Efx)   Details   DMCA

This week peace was given a chance in Vienna. And in spite of partisan hyperbole, after almost two years of intense shuttle diplomacy the leadership of Iran, Germany, and the five permanent members of the United Nations Security Council should at least be commended for reaching common ground. This rare first step toward a peaceful resolution in the Middle East was desperately needed and the negotiators took it.

The historic agreement, announced Tuesday by President Obama, not only reins in Iran's nuclear program, restricting its atomic research to peaceful activities, but gradually lifts crippling international economic sanctions on the Iranian people in return. A controversial win/win reached only after a self-imposed deadline of June 30 was surpassed; this peaceful reversal to a centuries-old mindset of hostility might actually restore the hope that war and bloodshed in that volatile region could actually be supplanted by peace and stability.

Diplomacy is hard work, but the recourse to talking is usually war. As expected, detractors to this Vienna accord, including Israel and Saudi Arabia - as well as Congressional hawks that never saw a war they didn't like or vote to fund - seem more bellicose with each day to restore that option. Delusional hyperboles like Iran as an existential threat or combating Iranian state-sponsored terrorism now appear to be losing ground as reliable doublespeak for justifying US hegemony in Persian Gulf Region, but the 2016 Presidential campaign needs fodder and the debates are less than a month away.

Nobel Peace Laureate Yitzhak Rabin once said, "A diplomatic peace is not yet the real peace. It is an essential step in the peace process leading towards a real peace." And this week's historic first step in Vienna, if anything, raises the bar on laudable.

Congress is expected to vote in September on whether the Iranian compromise moves forward and there are members of the U.S. House and Senate who want to scuttle this diplomatic effort. Now is the time to insist, rather demand, that our Congressional representatives give peace another chance, and publicly go on record in support of the deal with Iran.

The author of this piece is Vietnam Veteran and former Naval Aviator Gene Marx. He has served as a member of the Veterans For Peace Membership Committee and was the past Secretary of the VFP National Board of Directors. He lives in Bellingham, (more...)

Related Topic(s): Diplomacy; Iran; Iranian; Peace, Add Tags
Add to My Group(s)
Go To Commenting
The views expressed herein are the sole responsibility of the author and do not necessarily reflect those of this website or its editors.

Good Friday Struggle on the Island of Peace

The Way It Is

One Overreach Too Far

Time to Break the Silence on Military Spending