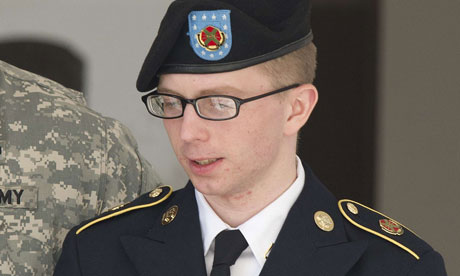 
(FILES)PFC Bradley Manning is escorted by military police as he departs the courtroom at Fort Meade, Maryland in this April 25, 2012 file photo. Photograph: Jim Watson/AFP/Getty Images

The court-martial proceeding of Bradley Manning has, rather ironically, been shrouded in extreme secrecy, often exceeding even that which prevails at Guantanamo military commissions. This secrecy prompted the Center for Constitutional Rights to commence formal legal action on behalf of several journalists and activists, including myself, to compel greater transparency. One particularly oppressive rule governing the Manning trial has barred not only all video or audio recordings of the proceedings, but also any photographs being taken of Manning or even transcripts made of what is said in court. Combined with the prohibition on all press interviews with him, this extraordinary secrecy regime has meant that, in the two-and-a-half years since his arrest, the world has been prevented, literally, from hearing Manning's voice. That changes today.

The Freedom of the Press Foundation (FPF), the group I recently helped found and on whose board I sit, has received a full, unedited audio recording of the one-hour statement Manning made in court two weeks ago, and this morning has published that recording in full.

Hear the full audio here or in excerpts below:

In that statement, Manning details at length what he did and, more important, the reasons he chose to do it. I'm personally unaware of who made the recording and am not aware of how it was made, but its authenticity has been verified. Last week, the superb independent journalist Alexa O'Brien, who has covered the proceedings from start to finish, created the best transcript she could of Manning's statement, which was published, among other places, in the Guardian. But this audio recording provides the first opportunity to hear Manning, in his own voice, explain his actions; that, presumably, is why whoever recorded Manning's statement risked violating the court-martial rules to do so.

Manning on the Iraq and Afghanistan War logs

In July, 2010, WikiLeaks began publishing tens of thousands of war logs detailing various episodes in both the Iraq and Afghanistan wars. Among other things, these documents revealed 15,000 Iraqi civilian deaths than had been uncounted, a US policy expressly barring US troops from investigating human rights abuses by the Iraqi forces they were training, previously unknown civilian deaths in Afghanistan at the hands of NATO, and definitive proof that US government and military officials had knowingly lied to the public about these wars. Here is Manning explaining his reaction when he first saw these documents and why he decided to leak them; listen on the player above.

"During this time a blizzard bombarded the mid-atlantic, and I spent a significant period of time essentially stuck in my aunt's house in Maryland. I began to think about what I knew and the information I still had in my possession. For me, the SigActs represented the on the ground reality of both the conflicts in Iraq and Afghanistan.

"I felt that we were risking so much for people that seemed unwilling to cooperate with us, leading to frustration and anger on both sides. I began to become depressed with the situation that we found ourselves increasingly mired in year after year. The SigActs documented this in great detail and provide a context of what we were seeing on the ground.

"In attempting to conduct counter-terrorism or CT and counter-insurgency COIN operations we became obsessed with capturing and killing human targets on lists and not being suspicious of and avoiding cooperation with our Host Nation partners, and ignoring the second and third order effects of accomplishing short-term goals and missions. I believe that if the general public, especially the American public, had access to the information contained within the CIDNE-I and CIDNE-A tables this could spark a domestic debate on the role of the military and our foreign policy in general as [missed word] as it related to Iraq and Afghanistan.

"I also believed the detailed analysis of the data over a long period of time by different sectors of society might cause society to reevaluate the need or even the desire to even to engage in counterterrorism and counterinsurgency operations that ignore the complex dynamics of the people living in the effected environment everyday."

Related Topic(s): Audio; Bradley Manning; Wikileaks, Add Tags
Add to My Group(s)
Go To Commenting
The views expressed herein are the sole responsibility of the author and do not necessarily reflect those of this website or its editors.