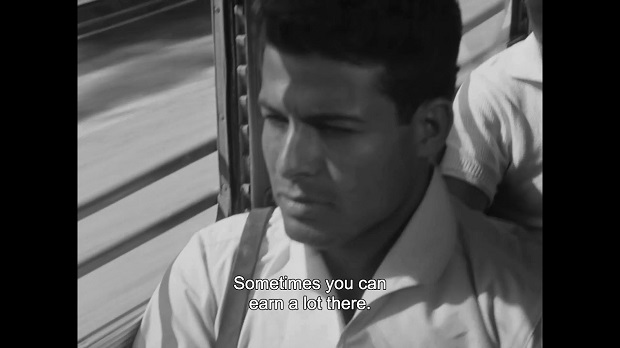 A new documentary brings to light an episode almost completely erased from Israel's official history and one that reveals how Israel's apartheid character was established from its birth.

The "The Voice of Ahmad" by directors Avshalom Katz, David Ofek, Ayelet Bechar, Shadi Habib Allah, Naom Kaplan, Mamdooh Afdile, and Iddo Soskolne is being screened in Israel this month. It centers on the extraordinary early life of Ahmad Masrawa back in the 1950s, as the recently established Jewish state was finding its feet.

Masrawa was one of many hundreds of Palestinian teenagers in Israel who were adopted by a kibbutz, agricultural communes that were at the core of the Zionist movement's efforts to Judaize lands just stolen from the Palestinian people both from refugees forced out of Israel and from the small number of Palestinians, like Masrawa, who managed to remain inside the new state.

Today, hundreds of these kibbutzim exist, all of them exclusively Jewish and controlling the vast bulk of Israeli territory. Israel's Palestinian citizens are effectively banned from living in them.

But, as this new film shows, there was a brief moment when a handful of progressive Israeli Jews imagined a different future in which Jewish and Arab kibbutzniks could live together. That experiment ended in complete failure.

A stab in the back

Masrawa is part of the largely-overlooked Palestinian minority in Israel today a fifth of the country's population. He was among a rump population of Palestinians who avoided the mass expulsions of the 1948 Nakba, or catastrophe, that created Israel on the ruins of the Palestinian homeland.

The fact that Palestinian citizens, now numbering 1.8 million, have the vote is often cited as proof that Israel is a normal western-style democracy. Nothing could be further from the truth, as this documentary underscores.

Ahmad's strange teenage years have been unearthed now because he starred in a short documentary in the mid-1960s, called "I Am Ahmad," that was initially censored and, when it was finally screened, caused uproar. Ram Loevy, its director, says in the new film that his documentary was viewed by most Israeli Jews at the time as "a stab in the back."

It was the first time an Israeli film had ever allowed an "Israeli Arab" a Palestinian citizen of Israel to be the protagonist.

"I Am Ahmad" follows Masrawa as a near-two-decade military government imposed on Israel's Palestinian minority is being lifted just before the outbreak of the Six-Day war. He is filmed leaving his poor village of Arara in northern Israel to travel to the rapidly expanding Jewish coastal city of Tel Aviv to find work.

Masrawa narrates the film, providing personal reflections in Hebrew on what it is like to live effectively as a foreign worker in your own country.

Like many thousands of other Palestinians in Israel, he was forced by day to work as a casual laborer on construction sites, disappearing at night to dwell in slum neighborhoods of tin shacks set up by Palestinian citizen workers on the outskirts of Tel Aviv.

I AM AHMAD CLIP S ONE

The Voice of Ahmad is compilation film, comprising six short documentaries inspired by or expanding on I Am Ahmad, a restored version of which opens the new movie.

Related Topic(s): Apartheid; Arab; Citizens; Israel; Israeli Racism; Judaism Jewish; Palestinian; State-sponsored Racism; Zionism, Add Tags
Add to My Group(s)
Go To Commenting
The views expressed herein are the sole responsibility of the author and do not necessarily reflect those of this website or its editors.