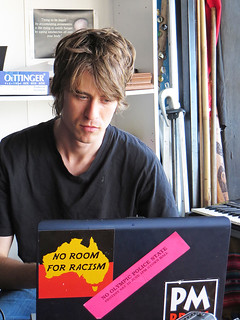 NO ROOM FOR RACISM
(Image by Newtown grafitti)   Details   DMCA
How many times have you clicked on a news article or a blog piece, or watched a YouTube, only to find that the comments section attached to it is a slime pit of some of the most vile racist comments imaginable?

Too often, your response may be like mine has been at times--you shrug and decide, "I don't read comments." You click away, and move on to the next story, web page or video.

You don't have to deal with the racism, because it's no longer on your screen.

Back in December 2012, I wrote a post, Ending racism--one person at a time. Contrary to recent opinions I've read, as a black person in the United States, I don't think racism has gotten worse, nor do I believe we are "post-racial."

What I do believe is that the relative anonymity of the internet has allowed many people to express their racism openly, rather than behaving one way in public spaces where someone from the group they hate may be present. Now they can give full rein to thoughts that might garner them public censure or worse if this crap was said face-to-face.

The fact that elected officials, and the Teapublican Party touts its racism openly, with little or no pushback from its membership and only hypocritical "nopologies" when busted, has given license to "racists run wild" in cyberspace.

Recently while reading a Times piece on Michael Brown's murder and the ensuing events in Ferguson, I saw a comment, recommended by readers, that fit into the "but " but " but " Mike Brown was a thug" genre of post. It was a repost of a vile email and post making its way through racist networks that purported to show an arrest record for a Michael Brown. The problem is that the Michael Brown with the record was not the same Michael Brown whose life was cut short by Officer Darren Wilson. This is not to say that it makes one whit of difference if the deceased Michael Brown had or didn't have an arrest history--nothing in a person's background should excuse being executed. I'd already seen a debunking here on Daily Kos, and did some checking on my own. Weeks later, Michael Brown's lack of a record is now in the news and yet the smear campaign continues.

When I read that story, and saw a recommended reader comment citing the false email, I flagged it, and when I checked back about an hour later it had disappeared.

One small victory in a sea of cyber-hate.

In this exploration of the way racism is translated from the print-only era to the cyber era the author takes the reader through a devastatingly informative tour of white supremacy online. The book examines how white supremacist organizations have translated their printed publications onto the Internet. Included are examples of open as well as 'cloaked' sites which disguise white supremacy sources as legitimate civil rights websites. Interviews with a small sample of teenagers as they surf the web show how they encounter cloaked sites and attempt to make sense of them, mostly unsuccessfully. The result is a first-rate analysis of cyber racism within the global information age. The author debunks the common assumptions that the Internet is either an inherently democratizing technology or an effective 'recruiting' tool for white supremacists. The book concludes with a nuanced, challenging analysis that urges readers to rethink conventional ways of knowing about racial equality, civil rights, and the Internet.

In her book, Cyber Racism: White Supremacy Online and the New Attack on Civil Rights, Jessie Daniels discusses the common misconceptions about white supremacy online; it's lurking threats to today's youth; and possible solutions on navigating through the Internet, a large space where so much information is easily accessible (including hate-speech and other offensive content). Daniels claims that although no one can say for sure how many white supremacy sites there are on the internet, the number is definitely rising (especially after Barack Obama's election in 2008), and a majority of them are fueled by people in the USA.

A review from the blog and website for the African and African American Studies course, "Exploring Race and Community in the Digital World," taught by Carla D. Martin, states:

Daniels lays out three threats that white supremacists pose online to the the world:

Threat 2: Some white supremacist sites, that subject minorities to the "white racial frame," motivate danger and violence in real life.

Threat 3: Through the nature of its medium, the Internet tends to equalize all sites, rendering what used to be intensely personal and political views in the 1960's into a modern-day matter of personal preference.

Related Topic(s): Comment; Hate Speech; Hate-Racism-Bigotry, Add Tags
Add to My Group(s)
Go To Commenting
The views expressed herein are the sole responsibility of the author and do not necessarily reflect those of this website or its editors.