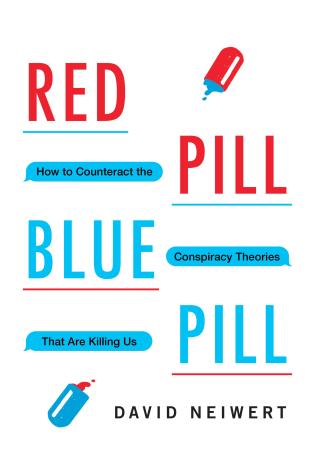 Shane Burley interviews David Neiwert on his new book, "Red Pill, Blue Pill: How to Counteract the Conspiracy Theories That Are Killing Us"

Conspiracy Theories Are Killing Us - and Trump's Departure Hasn't Ended Them

This being a review of an interview, it might come off a little critical. After all, it's a lot of work for an author, flogging a book, after all the pangs of gestation and delivery. I should be so lucky. But a sales pitch is fair game, and if you get interviewed on Truthout, any response is gravy after that. Even better if some rabid-but-articulate believer started on them. Actually the author in question makes some very good distinctions, and I plan read the book.

I don't take issue with the general idea of responding effectively to the ongoing societal damage from paranoid fantasies infesting the junk-news outlets and "social" media. But the idea that we can violate Einstein's observation about the futility of solving a problem from the same mindset that created it troubles me. Bucky Fuller elaborated on this by pointing out that you can't change the paradigm from inside it, you have to create a new one that renders the old one obsolete. And we're familiar with Gandhi's version of this: change is a matter of being, not doing, so be the change you want. If we ignore this wise counsel, effectiveness is the first thing overboard.

"While rural America is far from a monolithic white demographic, those rural areas that continue to be overwhelmingly white have seen a mass orientation to conspiracy theories. Motivated by racism as well as misplaced blame for economic and cultural disaffection, conspiracy thinking has taken over in towns around the country."

"Neiwert unpacks how these theories are lethal, both to the people being consumed by them and the communities that surround them, and this requires us to find a way to confront them head on."

This neat summation seems quite clear. But it remains safely within the box it is attempting to think outside of. All we can do in here, is move the pieces around according to the prevailing logic. Lately we're seeing this play out as otherwise reasonably progressive leaders begin to look through Roget's in a desperate search for synonyms for "censorship" that won't arouse what Neiwert calls "the sort of absolutism about the First Amendment".

I could go howling off after that one, but that won't get us out of that box. Here I just want to point out that such are the options we are given by the paradigm, the box we're trying to think outside of. If we pursue that line, maybe we can think about a new paradigm next year, after we find out how it goes trying to control corporate interests that are accumulating so much free money by handing out bullhorns to conspiracy theorists. And good luck with that: heads they win, tails you lose, in this particular sandbox.

There are also some unexamined-but-reality-constructing verbal icons here. "Motivated" assumes that people do things for reasons, like enlightened self-interest, lust, generosity, or maybe just fear and loathing. But perception is correlated to action is correlated to perception. Reaction accompanies perception like the front and back of your hand. This is recent brain-science, but quite well established. Reasons are tacked on later ("misplaced blame"), long after the horses have left the barn.

"Racism" is another icon fraught with variables. We are neck-deep in scholarly published works on just exactly what we mean by it. In the prevailing worldview, our options are two: for it, or agin' it. In the aforementioned junk news outlets (where Baldwin and Davis and West and so many others are still rarely seen) we have a very hard time talking about it without reference to profit and loss.

But the best model can be found in addiction and recovery. People get an endorphin rush from almost anything, including violence. And it's worse than that. Addiction is also the best way to describe the "consumer" culture now widely assumed to be driving the global economy, in which everything is a tradable commodity, and investor confidence determines who gets to consume. Or be consumed.

"Confronting them head-on" -- and the theories may be hard to separate from "the people being consumed by them" -- is not a simple matter of winning a debate. You want confrontation? To paraphrase Ammon Hennacy, you have to put your hand in the air in front of people who feel like you, and say the words: "I'm powerless..." And then you have to deal with it all over again the next day. And in twenty years, if you relapse, it will be just as if you never stopped.

In the interview, Neiwert asserts that market commodities are poisoning the market itself.

"The sort of absolutism about the First Amendment has been a huge opening for conspiracism to creep through and toxify our democratic marketplace of ideas."

First Amendment absolutism is an opening for creeping conspiricism in our... What? No. These are empty concepts that won't empower anybody. The only opening in a market is when somebody pays the slotting-fees for shelf space down at "our democratic marketplace of ideas" where these shopworn commodities are for sale, like everything else in a marketplace. Investor confidence decides the slotting-fees, whether for ideas or canned beans. Billions are still being invested in conspiracy theories. A head-on confrontation? Phooey. Just more marketing. Step right up, get your front row seats while they're hot. Right about now, the universities will be coming out with a new BC graduate degree program. They're all about new markets now, too.

How I feel about the whole "marketplace of ideas" thing: you can't buy Wisdom. You can't sell it. And you can't "toxify" it either.

Only at the very bottom of this interview, where editors tend to chop paragraphs off with procrustean abandon, do we see Neiwert holding out for a little circumpection:

Related Topic(s): Author; Change; Conspiracy; Interviews; Marketing; Markets; Media; Winning; Wisdom, Add Tags
Add to My Group(s)
Go To Commenting
The views expressed herein are the sole responsibility of the author and do not necessarily reflect those of this website or its editors.