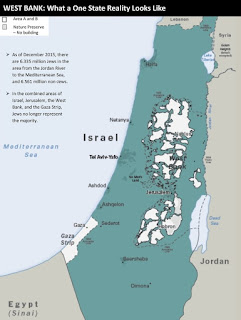 On July 8th, The New Yorker published a short piece by Adam Entous, under the graphic above, titled "The Maps of Israeli Settlements That Shocked Barack Obama." In the article, Entous purports to tell us the heretofore unknown inside story of how the Obama administration came to the surprising realization that Israeli settlements were taking over the West Bank. In the kind of irony The New Yorker might best appreciate, the magazine's latest promotional tag line is: "Fighting Fake Stories With Real Ones," and this Adam Entous article is the epitome of fake.

As Entous narrates it, in 2015, the third year of Obama's second term, as his "Presidency was winding down," a gentleman called Frank Lowenstein--who was, and still is, the Special Envoy for Israeli-Palestinian Negotiations and Senior Advisor to the Secretary of State--stumbled upon a map of West Bank settlements "that he had never seen before." Though Lowenstein--as, you know, Special Envoy for Palestinian Negotiations and all--had seen "hundreds of maps of the West Bank" and had one "adorning" his office, this "new map in the briefing book" was a revelation to him. It showed clearly that "not only were Palestinian population centers cut off from one another but there was virtually no way to squeeze a viable Palestinian state into the areas that remained."

Shocked, shocked, Lowenstein scurried off to show the map to Secretary of State John Kerry, telling him: "Look what's really going on here." After studiously having the map's information "verified by U.S. intelligence agencies," Kerry then unfurled the map on a coffee table in the White House for President Obama to see. As Ben Rhodes, "one of Obama's longest-serving advisers," recounted, Obama, too, was "shocked" at Israel's "systematic" use of settlements to "cut off Palestinian population centers from one another."

All of this shock was then translated into action. Of the rhetorical sort. Kerry "incorporated [the key findings] into "speeches and other documents, and Lowenstein "walk[ed] [the Israelis] through" those findings--though he "didn't show the maps to the Israelis." (Because what? He didn't want to "shock" them? Didn't want to make the case to them too strongly, lest it upset them? Didn't want to have to apologize? [see below] Pause for a moment, or more, to consider that demurral, which remains unexplained by Entous or Lowenstein. It's the kind of withholding of information one would do in the face of an innocent child one wants to protect, or in the face of a more powerful superior one does not want to annoy. What is the place for such reticence in the relation between the United States and Israel?)

Capping off this new wave of decisive rhetorical action, driven by the "alarm" over what he saw in the "maps" (now plural), President Obama "decided to abstain on a U.N. Security Council resolution condemning the settlements." In the true punchline of the article, Entous presents this abstention as "Obama's final act of defiance against Benjamin Netanyahu"before Donald Trump took office and put in place policies that were far more accepting of the settlers."

All in all, this article presents a perfect exemplar of ideological production: it produces without recognizing the bizarre, nearly delusional aspects of liberal ideology in its current state; for the author and his likely readers, it shows the faults of that mindset but does not see them, and in fact turns them into a story re-confirming the virtue of those--whether author, reader, or subject of the story--who hold that mindset. It's not only fake; it's a fake-out.

Let's walk through all the possible meanings of this article.

Related Topic(s): Israel; Israel And Palestine; Israeli Settlements; Media; Media Fake News; Obama Administration; Obama Middle East Policy; Palestinian, Add Tags
Add to My Group(s)
Go To Commenting
The views expressed herein are the sole responsibility of the author and do not necessarily reflect those of this website or its editors.