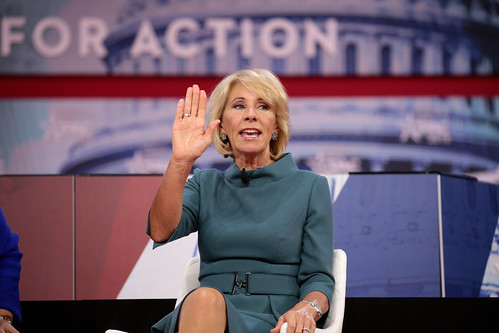 Earlier this month, Kim ordered a lawsuit to go "full-steam ahead" after the DeVos-led Education Department was found guilty of violating an Obama-era court order requiring the now-defunct Corinthian College to stop collecting loan payments from 16,000 former students.

The Education Department's $100,000 fine is expected to be put toward compensating the exploited loan borrowers.

The Department's response admitting it made "mistakes" but did not intend to violate Kim's order is curious considering DeVos has complained students were just "raising their hands" to get "free money."

Kim stated in her eight-page ruling:

"[There is] no question that defendants' violations harmed individual borrowers who were forced to repay loans either through voluntary actions or involuntary methods (offset from tax refunds and wage garnishment) and who suffered from the adverse credit reporting."

If the Dept. continues violating the order, Kim concluded she "will impose additional sanctions."

"It's a rare and powerful action by the court to hold the secretary in contempt, and it reflects the extreme harm that Betsy DeVos and the Department of Education have caused students who were already defrauded by a for-profit college."

The Obama administration put in place policies requiring the U.S. Education Department to investigate loan-servicing companies' past conduct before the government awarded lucrative contracts. Those contracts were required to include certain consumer protections, such as prohibiting loan-servicing companies from cheating federal student loan borrowers and guiding borrowers through the repayment process.

Once DeVos assumed Education Department control after Donald Trump took office, however, she ignored the approximately 160,000 loan-forgiveness applications until 80,000 individuals won a class-action lawsuit compelling her to stop collecting on their loans.

Garnishing former students' tax refunds and wages despite the court order, DeVos continued collecting on loans, benefiting 102 companies posing potential conflicts of interest, exposing her investments in the very companies from which Obama's student-lending policies were meant to protect.