The normal aggressiveness of the U.S. military force does not satisfy Bolton; he wants the United States to deepen its aggressiveness. 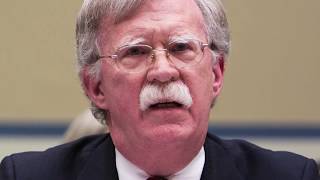 Warmonger John Bolton to Become National Security Adviser
(Image by YouTube, Channel: Status Coup)   Details   DMCA
Even U.S. President Donald Trump, who is getting ready to pardon war criminals, fears John Bolton. Trump had hesitated to give Bolton a seat in his Cabinet (initially because of Trump's distaste for Bolton's bushy mustache). Bolton and General H.R. McMaster were both in line to become National Security Adviser (NSA). Trump went with H.R. McMaster, who lasted a year. Bolton, called "The Mustache" by Trump, slipped into this consequential post. The NSA is the main adviser to the U.S. president on foreign policy -- often more important than the Secretary of State. Bolton has Trump's ear. Trump, mercurial in his policy-making, therefore, has the world's most dangerous man whispering at him.

As his trigger finger tightened with Iran in the gunsights, Trump said of Bolton, "if it was up to John, we'd be in four wars now." Bolton is on record saying that he would like to turn the immense force of the U.S. military against Cuba, Iran, North Korea, and Venezuela. These are likely the "four wars" that Trump mentioned. These would be additional wars, for the United States remains actively at war in Afghanistan as well as in Iraq and Syria. The United States currently operates over 100 military bases -- many of them in active operations -- around the world.

The normal aggressiveness of the U.S. military force does not satisfy Bolton; he wants the United States to deepen its aggressiveness.

Bolton is much like the typical war hawk. Such people want to send others to war. They don't want to go to war themselves. Bolton smartly went into the National Guard in 1970. In a Yale reunion book, he wrote, "I confess I had no desire to die in a Southeast Asian rice paddy. I considered the war in Vietnam already lost." When Bolton made this personal decision, his heroes -- Nixon and Kissinger -- began their illegal and barbaric bombing of Cambodia and Laos. Between Bolton's decision not to go to Vietnam and the U.S. retreat from Saigon, 3,304 U.S. soldiers died as well as uncounted numbers of Vietnamese, Cambodian and Laotian people.

In government for most of his life, Bolton worked hard against the good side of history. A key part of Bolton's work was to help the cover-up of the Reagan administration's role in supporting the Contras and in the Iran-Contra affair. After the left-wing Sandinistas came to power in Nicaragua in 1979, first the Carter and then the Reagan administration assisted the military and the oligarchy to form la contrarrevolución (the Counter-Revolution) or the Contras. Trained by the United States, the Contras used the most brutal methods against ordinary people to undermine the Sandinista government. When the U.S. Congress -- pushed by public opinion -- stopped overt U.S. funding for the Contras, the Reagan administration illegally sold arms to Iran, whose profits went to fund the Contras. This was the Iran-Contra scandal. Bolton fought to block Senator John Kerry's attempts to investigate drug-smuggling and gun-running by the Contras in Nicaragua. He refused to allow documents on the Iran-Contra affair to be turned over to Congressman Peter Rodino. Bolton did the heavy work for the administration, which nonetheless found his language to be often "contentious and intemperate" as White House spokesperson Marlin Fitzwater said in 1987.

Intemperateness is the mood of Bolton. In 1994, he said of the UN Secretariat building in New York that if it "lost 10 stories, it wouldn't make a bit of difference." Chilling words. Bolton lived them. He spent years trying to undermine any decent arms control treaty in the United Nations framework and he spent years trying to shield the United States from any international accountability. In 2000, Bolton ridiculed the "Church of Arms Control" the phrase a clear indication of his attitude to peace, one shared with large sections of the U.S. ruling class.

It was Bolton who pushed the George W. Bush administration in 2001 to walk away from the Anti-Ballistic Missile Treaty of 1972, an act that sent belligerent signals to Moscow. It was Bolton again who egged Bush in 2003 on to smash the Agreed Framework of 1994 between the United States and North Korea. When U.S. intelligence -- whose credibility was damaged by the Iraq materials -- said that North Korea had begun to enrich uranium, there was to be no further dialogue. Bolton later wrote, "This was the hammer I had been looking for to shatter the Agreed Framework." It was Bolton once more who urged Trump to depart from the Iran nuclear deal, and most chillingly it was Bolton who killed the Intermediate-Range Nuclear Forces Treaty of 1988.

Bolton's record is clear. But so are his words, not only his speeches, but also his deeply informative book -- Surrender Is Not An Option (2008). The contours of Bolton's vision are clear in both the acts and in the words. The fulcrum of his thinking is this: that U.S. power must be unchecked, and it must be used to ensure the perpetuity of U.S. domination. There will be no surrender to any multi-polarity or to bi-polarity (China and the United States). U.S. domination is absolute and should be permanent. Few U.S. elected officials have the guts to disagree with this disagreeable worldview. They salute the flag and send the bombers to spread the stars and stripes across the globe.

What are the hindrances for this permanent and absolute U.S. dominion?

Related Topic(s): Fear As Policy; Iran; John Bolton Warmonger; Military; Trump And Bolton, Add Tags
Add to My Group(s)
Go To Commenting
The views expressed herein are the sole responsibility of the author and do not necessarily reflect those of this website or its editors.