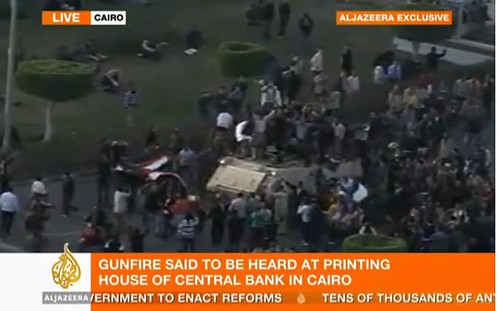 As the Egyptian revolution unfolds, tune in to this live blog -- check back for updates periodically throughout the day. Mubarak and the U.S. appear to be working to develop reforms that can calm the anger in Egypt. But, it seems like they do not want to admit the people will not leave the streets until Mubarak resigns.

11:07 PM ET Samer Shehata, professor of Egyptian and Arab politics at Georgetown University, appears on Al Jazeera and gives further confirmation of Interior Ministry security people looting and fomenting chaos and anarchy. Suggests that Mubarak wants to show people and world that either you get my regime or you get this. And, he point out that this chaos was not seen Friday or any of the days before. Just now as the Mubarak regime grows more desperate.

8:06 PM ET "The people have become the police. You don't see the police on the streets right now." - Al Jazeera Reporter on people doing neighborhood watch, checking on people to make sure they do not have weapons or working to prevent looting and damage of property

Al Jazeera has put together a slideshow "The Domino Effect: Pan-Arab Unrest"

Jane Mayer's book The Dark Side was being talked about earlier because now-VP Omar Suleiman was featured in stories of the CIA rendition and torture program in Egypt. Mayer has now put up a short post on The New Yorker website.

5:46 PM ET Reports now from Al Jazeera of Interior Ministry snipers firing on protesters: "Gunfire has been heard coming from the direction of the interior ministry in Cairo during a confrontation between guards and protesters, and the National Press Building next to the NDP headquarters is on fire."

5:07 PM ET - An activists' action plan has been circulating. News organization like The Guardian have put together summaries for the pamphlet. The pamphlet:

Kevin Gosztola is managing editor of Shadowproof Press. He also produces and co-hosts the weekly podcast, "Unauthorized Disclosure." He was an editor for OpEdNews.com
Related Topic(s): Egypt; Egypt; Egyptian Revolution; Fear; Hosani_mubarak; Protest- Civil Disobedience; Revolution; Wikileaks, Add Tags
Add to My Group(s)
Go To Commenting
The views expressed herein are the sole responsibility of the author and do not necessarily reflect those of this website or its editors.