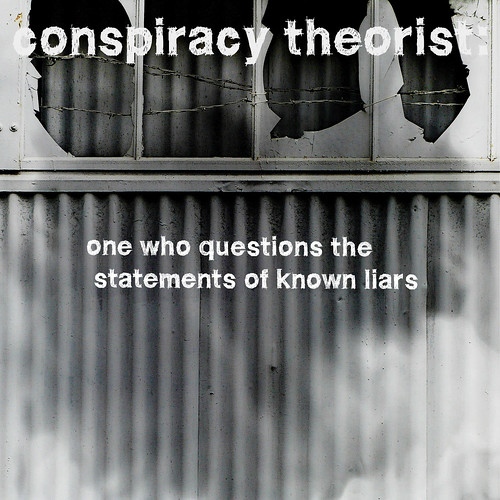 A .conspiracy theorist.: One who questions the statements of known liars!
(Image by msdonnalee)   Details   DMCA

As Covid-19 increasingly disrupts daily life, and as the factors are in place for the virus to grow even bigger in near-future America, eerie similarities are appearing between now and the aftermath of 9/11. In that instance, a new normal of fear was created, one that impacted everything from how people viewed going out in public to who was viewed as a potential threat to society. And for Americans, this alarm and confusion was particularly related to the question of who exactly was responsible for the crisis-as well as the question of what our own country's role should be in the new world that the crisis had created.

Americans were at one point told, and mostly believed, that Saddam Hussein was to blame for the attacks. While this ruse became obvious fairly quickly, right from the start there was a very effective effort to manage the narrative in order to gain popular consent for whatever the empire wanted to do. The investigation into 9/11 was botched, with the FBI helping cover up Saudi Arabia's apparent connections to the attacks. In the coming years, these and other inconsistencies in the official story, such as the incident of the dancing Israelis and apparent Mossad foreknowledge of the attacks, would be pushed to the side. As foggy and uncomfortable as the details behind 9/11 were, Americans had entered into a new era of mass surveillance, perpetual war, and eroded civil liberties.

Underneath it all was the issue of empire. The United States had always believed itself to be exceptional, and it had become the most powerful imperialist force in the history of the world. Many Americans didn't want to lose this power. When the neoconservative class reacted to 9/11 by launching two invasions, and ultimately expanding the War on Terror into an eight-countrywide droning and bombing campaign, fear was the core of their argument. Fear that the American people were under such a dire threat from omnipresent enemies that ever-escalating militarism was the only option.

Unbeknownst to the ideologues, the invasions of Afghanistan and Iraq had set off a process of decline for America's global power, one where the country's international reputation was lost because of its illegal and destructive actions. This gave the country less support amid the rise of Asia, which the U.S. responded to with more military buildup, economic warfare, and reckless aggressions. In 2011, the U.S. used its allies within terrorist groups to start a regime change war in Syria, followed by the installation of an aggressive U.S.-backed fascist regime in Ukraine in 2014. Tensions rose with Russia and China, which have both been targets of a hybrid war of economic sabotage, nuclear threats, and U.S.-backed religious extremist violence.

By 2019, China had edged out American primacy in the Indo-Pacific. More countries were embracing the benefits from Chinese economic partnership, especially with the case of China's rising New Silk Road initiative. This resulted in Washington's waning influence in the Middle East, the growing anti-U.S. rebellions in Latin America, and the rising global proletarian opposition to neoliberalism, Eurasia was well on its way towards slipping from America's control. The American military/intelligence complex and its corporate partners grew desperate to subdue China and its allies, and to squash the rising wave of populism. So right on time, we got a new 9/11.

While the official narrative seems to be that the virus indisputably originated within China, with some imperialist pundits and politicians going a step further to accuse China's government of engineering it, the evidence is in favor of it originating from the U.S. Only the U.S. has been known to have the variety of coronaviruses that could have branched out into Wuhan, and examinations of the virus have found that it's not plausible for the disease to have originated in a Wuhan seafood market as Western media outlets have asserted.

A Russian expert has raised the possibility that it's a U.S. bio-weapon, and the crisis has been exploited by the U.S. empire and the Western corporatocracy as if it had indeed been engineered in this way. The U.S. has been increasing its economic war on Iran amid the pandemic, the IMF has been blocking emergency aid loans to Venezuela, and the Western propaganda machine has been using the virus to blame and demonize China. Furthermore, Wall Street deregulations have been proposed to "fight coronavirus," just as Naomi Klein has assessed:

"This crisis like earlier ones, could well be the catalyst to shower aid on the wealthiest interests in society, including those most responsible for our current vulnerabilities, while offering next to nothing to most workers, wiping out small family savings and shuttering small businesses."

As Americans experience quarantines, and as the sensationalist U.S. media does all it can to encourage panic over this new super-flu, the empire prefers for people to believe that the crisis is the result of negligence or even malicious warfare on the part of the Communist Party of China. Once again, this impulse to blame the enemy of the day while ignoring any uncomfortable details comes from a place of fear that Americans are in danger of losing their dominance over the world. Far more than was the case during the aftermath of 9/11, this fear is well-founded, so America is in a full-on reactive phase.

The virus is leading to a new world order where U.S. influence is greatly diminished. Germany has withdrawn from the anti-Russian war games Defender Europe 2020 due to virus risks, making NATO less functional for the moment. In contrast to the U.S., which has been sabotaging the public safety of other countries, China has been sending great amounts of healthcare resources to much of the rest of the world, causing the Serbian president to say:

"European solidarity does not exist. That was a fairy tale. The only country that can help us in this hard situation is the People's Republic of China. For the rest of them, thanks for nothing."

By extension, he was talking about the solidarity between the U.S. and many of its supposed allies.

The U.S. has been engaging in micro-militarism (which is what historians call it when a country uses warfare to try to regain its waning influence) by bombing Iraq during the pandemic. This bombing campaign, which is directed at an Iranian-backed militia, has moved the U.S. closer to a war with Iran. ICE raids are also continuing, now extending to militarized roundups of the undocumented within the formerly protected sanctuary cities. As the military and the intelligence community quietly head the U.S. government's official response to the crisis, parallels to the 9/11 aftermath abound. Except now the state's crackdown will be accompanied by a campaign against migrants, censorship by tech companies, and a push towards World War III that centers around a great-power conflict with China.

Pepe Escobar of the Asia Times has written about the potential for psy-ops and social control that the virus holds:

Sandro Mezzadra, co-author with Brett Neilson of the seminal The Politics of Operations: Excavating Contemporary Capitalism is already trying to conceptualize where we stand now in terms of fighting COVID-19. We are facing a choice between a Malthusian strand-- inspired by social Darwinism-- led by the Johnson-Trump-Bolsonaro axis-- and, on the other side, a strand pointing to the "requalification of public health as a fundamental tool," exemplified by China, South Korea and Italy.

This is what capitalism looks like when its contradictions become most pronounced: sacrifices to protect the interests of the bourgeoisie, all while the state takes measures to maintain control. This is a structural response from a system that's ravaged the world's natural habitats and warmed the planet, and has made the world more susceptible to viruses like this one as a result. The rise of inequality and the hollowing out of social services are also part of what's made this crisis so severe. And like was the case during 9/11, it's clear that the crisis-- up to and including the events behind its origin-- has served the purpose of internal social control amid imperial decline.

Related Topic(s): American Imperialism; Corona Virus Coronavirus Covid-19; Fear As Policy, Add Tags
Add to My Group(s)
Go To Commenting
The views expressed herein are the sole responsibility of the author and do not necessarily reflect those of this website or its editors.