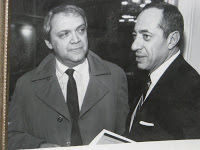 This isolation thing has us looking desperately for ways to stay connected on social media, which, of course, is exactly what it was intended to do in the first place. Unfortunately, politics more accurately, confrontational politics and outright lies have for the most part pushed pictures of cute dogs and cats and delicious meals to the periphery, if not completely off the Facebook news feed. Twitter is worse. The connection, when there is one, tends to be of an us-versus-them nature.

I admit to being part of this changed atmosphere. I think there's a fight going on for the future of a once-proud nation. But I also think there's a need to maintain that unthreatening, neighborly sense of connection. If we're all in the same boat, who are my co-passengers?

To be fair, I have seen attempts during this isolation to "connect," as it were, on Facebook. But I don't know what letter my favorite album begins with, Willie Mays will always be the best baseball player I ever saw and I don't qualify for the 10-photos-that-prove-I'm-a-mom challenge. I do like the renaissance of cooking photos, though.

So, in my own need to connect in a neighborly manner, I wandered through old columns I've posted on the Internet to see if I could find a promising topic.

There it was. On April 6, 2011. Ego. We've all got one and journalists have well-nurtured ones. But this column was an essentially harmless exercise in ego compiling a list of "famous" people I've met. As I wrote at the time, it was prompted by my previous column an obituary in effect in which I recalled a chance meeting with the late Geraldine Ferraro on a hot August day at the Ulster County Fair in 1998. The Newburgh native, former congresswoman and vice presidential running mate to Walter Mondale (first female from a major party to run for the office) was now running (again) in a Democratic primary for a Senate seat from New York. I was writing editorials for The Times Herald-Record in Middletown at the time. She was gracious: "Hi Bob, nice to see you again." She answered my questions and moved on with her hand-shaking. She lost to Chuck Schumer. She should've been the first female vice president of the United States.

That column got me to thinking of other "famous" persons I had met. I'll run through some of that list, with the hope that some readers will do the same in the comment section or in an email. Then I'll share them. Remember, this is about connecting and I'm sure many of you have memories of a brush, or more, with the famous or infamous. So share them. Basic ground rules: It must have been an actual meeting, meaning words were exchanged, hands possibly shaken, and local politicians don't count except for members of Congress. You need a line somewhere.

I must also add that, working in newspapers for more than four decades, one is bound to run into prominent people. It comes with the territory. My list happens to be heavier with sports personalities and politicians because I was once a sports editor and then a political writer and editorial writer. Of fellow scribblers, probably the most famous was columnist Pete Hamill, who visited The Record in Middletown. There was also Newsweek's Howard Fineman and longtime sports writer Milton Richman.

The world of sports offered encounters with Dallas Cowboys quarterback Roger Staubach (interviewed in the back of a limo in Binghamton. N.Y.), boxer/TV personality Rocky Graziano ("Somebody Up There Likes Me"), Orioles pitcher Jim Palmer (naked in a whirlpool bath), boxing champ Floyd Patterson (eating in a restaurant in New Paltz), Olympic marathon gold and silver medal winner Frank Shorter (after shorter races in Middletown, his hometown) and a memorable handshake in Binghamton with Jackie Robinson. ("A pleasure to meet you, Mr. Robinson.")

In the world of entertainment there was the very tall Harry Belafonte at the Concord Hotel (somewhere there's photographic evidence), the very drunk Clancy Brothers (around a bar after hours in Binghamton), Western novelist Larry McMurtry in Fort Worth, movie and TV actor Victor Arnold (the hit man in the original "Shaft"), over coffee in Middletown, Yiddish writer Isaac Bashevis Singer (on a stage in Sullivan County) and, in a Woodstock art gallery, an also very tall Henny Youngman ("Take my card, please.") He really said that. And I took it.

Not surprisingly, there are a bunch of political figures on my list, starting with Ferraro's running mate, former Vice President Walter Mondale (a hello-how-are-ya in Minneapolis). There are the New York governors: The imperial Nelson Rockefeller (he of the middle finger salute), the lanky George Pataki from Peekskill, and the Cuomos -- the senior, Mario, who could hold a room hostage for hours ( and did), and junior, Andrew, when he was state attorney general and when he was messing up the gubernatorial campaign of H. Carl McCall. Also, the other also-rans: New York Mayor Ed Koch, Tom (Who?) Golisano, Pierre ("the Record staff are the rudest people I have ever encountered") Rinfret, Andrew (I don't stand a chance) O'Rourke, Howard Samuels (a very cool customer), and Arthur (Hey, I was once a Supreme Court justice) Goldberg. Throw in Marvin Mandel in Maryland and Anne Richards in an elevator in Fort Worth. And of course, a special place is reserved in my heart for short-term New York governor, Eliot Spitzer, the dumbest smart politician I ever met.

Among senators, the erudite D. Patrick Moynihan held court in Goshen and Chuck Schumer showed up seemingly for breakfast every day at The Record. And, giving them their due, Congressmen Ben Gilman, Matt McHugh, Howard Robison, Maurice Hinchey, John Hall (who founded the rock group Orleans and also qualifies as an entertainer), Bella (The Hat) Abzug (hors d'oeuvres and handshakes on Long Island), and Congresswoman Sue Kelly, who famously and entertainingly imploded during an interview with The Record.

Among civil rights figures, Jesse Jackson (handshake and question) towered above the rest, literally and figuratively at a conference in Charleston, S.C., but Floyd McKissick, national director of CORE, was more accessible about 15 years earlier at Gentleman Joe's, a popular bar in Binghamton.

But perhaps the most "famous" person I ever had a meaningful conversation with is someone whose name almost nobody recognized, and most probably still don't know: Norma McCorvey. McCorvey is better known as Jane Roe of the Roe v Wade Supreme Court decision that confirmed a woman's right to choose abortion. When I met her in Middletown, she had not only changed from pro-choice to pro-life on abortion, but had joined the Roman Catholic Church and announced she was no longer a lesbian and was campaigning to overturn the decision. Change is news.