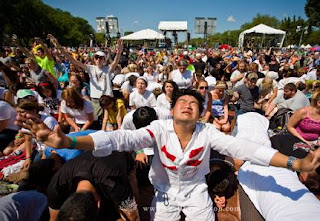 The Most Dangerous Man In America?

In 1996, editor (AU magazine) and writer Rob Boston wrote The Most Dangerous Man In America? Pat Robertson And The Rise Of The Christian Coalition. I've read the book and appreciated its straightforward take on Robertson's hypocritical form of Christofascism. I recently perused some of the reviews of the book on Amazon.com:

But the man [Robertson] is fringe. He's dumped his own personal fortune into his misguided ambitions. His movement is fading. At worst, all he did was channel folks who would have otherwise supported Pat Buchanan or third parties behind the established Republican candidate. His "Family Channel" - his main cash cow - is long gone, and the 700 Club will be off the air when the Disney Acquisition of the Fox Family Channel is complete.

Pat Robertson is history, not the bogeyman.

That review was written in 2002. "The 700 Club" is still broadcasting specious stories of "inspiration" and "decadence" and Pat Robertson is still broadcasting his talks "with God" and somewhere in America a little old lady in a rest home or a trailer park still touches the screen when Robertson appears hoping that he'll manage to cure her hemorrhoids. Yes, Pat Robertson is still with us, but his bloviations about Katrina, Haiti, Hugo Chavez, Ariel Sharon and all things gay have chipped away at the man's charisma. Many people think that senility has finally settled in Robertson's brain.

The problem is that Robertson still gets recognition. At 80, Robertson has a bigger political base than his father (Senator Absolom Willis Robertson) ever achieved. He has the ability to get attention wherever he is. And he uses that recognition with wild abandon.

But is he still the "Most Dangerous" in America's all-male political elite? Or has raspy-voiced evangelical Lou Engle taken over that role? Fiery preachers have come and gone, but Engle's violent speech is in league all its own:

My son, Jesse, he's nineteen years old. God has given him dreams, to go to San Francisco to launch a house of prayer - one block frpom the Castro District - where homosexuals boast the dominion of darkness. He's going there with weeping in his heart. With a dream that prayer is stronger than the dominion of that spirit.

...he's starting to cast out homosexual spirits out of our new converts. Its scary as hell... but fathers are to send their sons into the darkest places. ...St. Francis - Francis means 'free man'. San Francisco is the City of the Free Man.!

This last pronouncement I looked up. "Franciscus" means Frenchman. And while Francis, in some etymologies, means "free," Francis does not necessarily mean "Free man!" BTW: interestingly, the nickname "Francis" was given to Giovanni ("John") di Bardone by his father who was, at the time, an Italian cloth merchant enamored of all things French.

O.K., so that's a little picky, but expand Engle's half-truth into an hour-long sermon. Throw in some quotations from one Bible translation, then from another. Keep on demonizing, demonizing, demonizing until people think that a place like San Francisco has everyone practicing Satanism on the streets. Make people think that walking near 18th and Castro is an act of foolhardiness or extreme courage for anyone who is righteous. Make them think that everyone they see will automatically go to hell if they do not listen to your message. Make them think they may be coerced into homosexual acts in order to obtain dominion over a person's soul.

Rev. Dan Vojir is has been writing/blogging on religion and politics for the better part of ten years. A former radio talk show host (Strictly Books " Talk America Radio Network) and book publisher, Dan has connected with some of the most (more...)
Related Topic(s): American Facism; Gay Blood Libel; Gay Equality; Homosexuality; Scott Lively, Add Tags
Add to My Group(s)
Go To Commenting
The views expressed herein are the sole responsibility of the author and do not necessarily reflect those of this website or its editors.