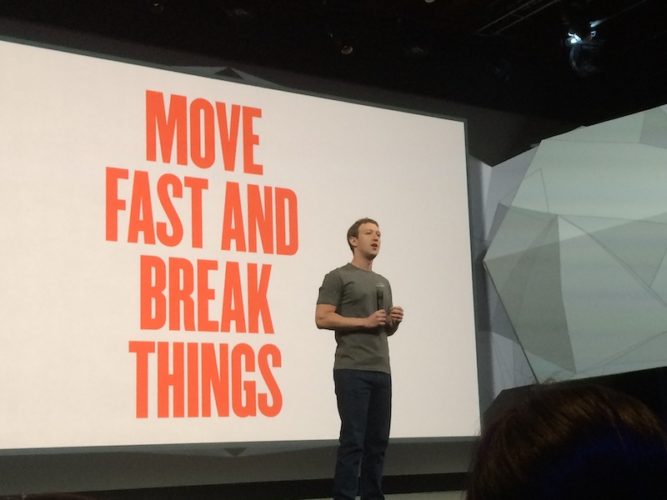 Facebook CEO Mark Zuckerberg speaks at a 2014 San Francisco event in front of a screen showing one of the tech giant's early mottos, 'Move Fast and Break Things.'
(Image by (Mike Deeroski / Flickr)(CC BY 2.0))   Details   DMCA

Payments can happen cheaply and easily without banks or credit card companies, as has already been demonstrated -- not in the United States but in China. Unlike in the U.S., where numerous firms feast on fees from handling and processing payments, in China most money flows through mobile phones nearly for free. In 2018 these cashless payments totaled a whopping $41.5 trillion; and 90% were through Alipay and WeChat Pay, a pair of digital ecosystems that blend social media, commerce and banking. According to a 2018 article in Bloomberg titled "Why China's Payment Apps Give U.S. Bankers Nightmares":

"The nightmare for the U.S. financial industry is that a technology company -- whether from China or a homegrown juggernaut such as Amazon.com Inc. or Facebook Inc. -- replicates the success of Alipay and WeChat in America. The stakes are enormous, potentially carving away billions of dollars in annual revenue from major banks and other firms."

That threat may now be materializing. On June 18, Facebook unveiled a white paper outlining ambitious plans to create a new global cryptocurrency called Libra, to be launched in 2020. Facebook reportedly has high hopes that Libra will become the foundation for a new financial system free of control by Wall Street power brokers and central banks.

But apparently Libra will not be competing with Visa or Mastercard. In fact, the Libra Association lists those two giants among its 28 soon-to-be founding members. Others include Paypal, Stripe, Uber, Lyft and eBay. Facebook has reportedly courted dozens of financial institutions and other tech companies to join the Libra Association, an independent foundation that will contribute capital and help govern the digital currency. Entry barriers are high, with each founding member paying a minimum of $10 million to join. This gives them one vote (or 1% of the total vote, whichever is larger) "in the Libra Association council. Members are also entitled to a share proportionate to their investment of the dividends earned from interest on the Libra reserve -- the money that users will pay to acquire the Libra currency.

Needless to say, all of this has raised some eyebrows, among both financial analysts and crypto-activists. A Zero Hedge commentator calls Libra "Facebook's Crypto Trojan Rabbit." An article in The Financial Times' Alphaville calls it "Blockchain, but Without the Blocks or Chain." Economist Nouriel Roubini concurs, tweeting:

It will start as a private, permissioned, not-trustless, centralized oligopolistic members-only club. So much for calling it "blockchain." Like all "enterprise DLT" it is blockchain in name only and an monopoly to extract massive seignorage from billions of users. A monopoly scam https:// twitter.com/coindesk/statu s/1140620454262124545 "

Related Topic(s): Banks; Dangerous; Facebook; Mark Zuckerberg; Untrustworthy, Add Tags
Add to My Group(s)
Go To Commenting
The views expressed herein are the sole responsibility of the author and do not necessarily reflect those of this website or its editors.