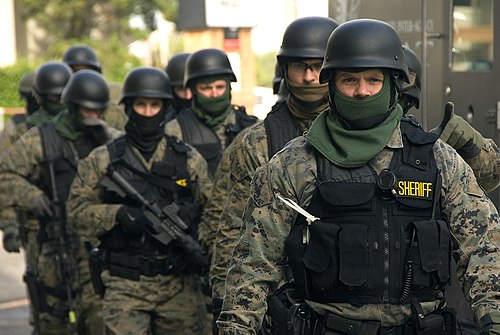 Facebook, USA Today reports, "is asking some U.S. users whether they may have been exposed to extremist content, or if they are worried that someone they know might be becoming an extremist."

The pop-ups are part of something called The Redirect Initiative, which attempts to "combat violent extremism and dangerous organizations by redirecting hate and violence-related search terms towards resources, education, and outreach groups that can help."

The Redirect Initiative sounds like something that could be a valuable public service if Facebook was serious about fighting extremism. But that's obviously not the case.

Only the least popular and least powerful extremists need worry that they'll be targeted by Facebook. The company actively coddles and cuddles up to the most powerful, violent, and deadly extremist groups on the planet: Governments.

Facebook's Community Standards on "Dangerous Individuals and Organizations" divides extremist groups into three tiers. The top tier includes "entities that engage in serious offline harms -- including organizing or advocating for violence against civilians, repeatedly dehumanizing or advocating for harm against people based on protected characteristics, or engaging in systematic criminal operations."

And yet the US Drug Enforcement Administration and Immigration and Customs Enforcement -- two groups explicitly organized for violence against civilians -- maintain active Facebook pages on which they publicly advocate for, and openly celebrate, their depredations with nary an objection from the company.

The US Internal Revenue Service -- a protection racket no different in principle from any other "nice income you got there, be a shame if anything happened to it" criminal scheme -- also uses Facebook without negative consequence.

Oh, Facebook will come down hard on a government or government-affiliated actor now and then, but only if that government or individual has managed to get on the wrong side of the political establishments Facebook itself supports and caters to.

Domestically, Donald Trump is the obvious example, and not a terribly sympathetic one.

Abroad, regimes and state actors who find themselves at odds with the regimes controlling Facebook's most profitable markets may face bans or "Facebook jail" for activities the company considers "legitimate" when the US or EU (for example) engages in them.

Facebook's claimed opposition to extremism isn't a principled stand against violence, hate, or criminal activity. It's performance art, virtue signaling, and propaganda in service to the extremist groups Facebook endorses and willingly works with -- with opposition to those extremist groups itself often falsely labeled "extremism," or at least "misinformation."

Related Topic(s): Extremism Extremists; Facebook, Add Tags
Add to My Group(s)
Go To Commenting
The views expressed herein are the sole responsibility of the author and do not necessarily reflect those of this website or its editors.