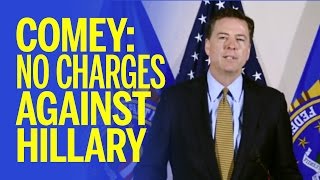 FBI Director James Comey announced Tuesday that his agency will not recommend criminal charges against Hillary Clinton for her use of a private email server to handle government communications during her four years as secretary of state in the Obama administration.

Comey read out a lengthy prepared statement that criticized Clinton and her staff in harsh terms, saying they had been "extremely careless" in the handling of classified information. However, he said, this conduct did not rise to the level of criminal violations, concluding that "no reasonable prosecutor" would bring criminal charges in this case.

The FBI director began by admitting that it was highly unusual for him to present his findings in a public statement, but that it was appropriate because of the widespread interest in the case. He then declared: "I have not coordinated or reviewed this statement in any way with the Department of Justice or any other part of the government. They do not know what I am about to say."

This disavowal of any pressure from inside the Obama administration was made necessary by the week-long furor provoked by the half-hour private meeting last Monday between Attorney General Loretta Lynch and former President Bill Clinton.

The Attorney General oversees FBI operations and would normally have the final say on any decision to prosecute. By Friday, Lynch was compelled to declare that she would not overrule the FBI recommendation on the Hillary Clinton email case, whatever it was, although she would still "review" it.

By Comey's account, of the 30,000 emails stored on Clinton's private server and returned to the State Department by her attorneys, 110 "have been determined by the owning agency to contain classified information at the time they were sent or received." The term "owning agency" refers to the agency which originated a chain of emails, frequently one of the intelligence agencies with more restrictive classification standards than the State Department.

Comey said the FBI review found that the "security culture of the State Department in general, and with respect to use of unclassified email systems in particular, was generally lacking in the kind of care for classified information found elsewhere in the government."

This comment sheds light on a protracted conflict within the federal government apparatus, beyond the partisan disputes between the Obama administration and its Republican congressional opponents. CIA and NSA officials in particular, joined here by the FBI, have responded to the public exposure of secret NSA spying operations, CIA torture at detention camps, and CIA and Pentagon drone-missile assassination programs, by demanding a tighter lid on information about such activities.

Most of the information deemed "secret" in the Clinton emails was retroactively classified by one of the intelligence agencies. Emails were reclassified as secret even in cases where they merely forwarded to Clinton's attention media reports about alleged secret US government activities.

This classification process has little to do with keeping US operations secret from foreign governments or terrorist groups -- the invariable pretext for such security procedures. The real purpose is to keep these operations secret from the American people, who are the real targets of most government spying, and the potential victims of torture and assassination by the government that claims, falsely, to represent them.

In explaining the decision not to bring any such charges, Comey reviewed the criteria required for bringing similar charges in past cases. "All the cases prosecuted involved some combination of: clearly intentional and willful mishandling of classified information; or vast quantities of materials exposed in such a way as to support an inference of intentional misconduct; or indications of disloyalty to the United States; or efforts to obstruct justice," he said. "We do not see those things here."

The distinction drawn here is between Clinton, whose mishandling of classified material was carried out in her own self-interest, and others, like Chelsea Manning and Julian Assange, who made classified material available to the public, exposing the crimes of US imperialism.

Left out entirely from the investigation was the content of Clinton's emails, which in many cases dealt with real crimes for which she bears responsibility. The subject matters ranged from her role in orchestrating a right-wing coup in Honduras to the fomenting of wars for regime change in Libya and Syria that have claimed the lives of hundreds of thousands, to her signing off on drone assassinations in Pakistan.

The FBI decision would seem to remove the last major obstacle to Clinton's becoming the presidential nominee of the Democratic Party. The announcement came only three days after Clinton was interrogated by an FBI task force for several hours about her role in the establishment and use of the private email server.

Patrick Martin writes for the World Socialist Website (wsws.org), a forum for socialist ideas & analysis & published by the International Committee of the Fourth International (ICFI).
Related Topic(s): Fbi Director James Comey; Hillary Server; Investigations, Add Tags
Add to My Group(s)
Go To Commenting
The views expressed herein are the sole responsibility of the author and do not necessarily reflect those of this website or its editors.