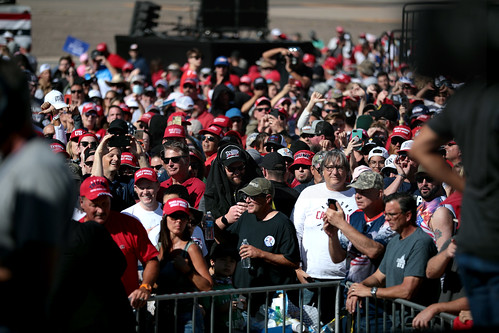 Donald Trump supporters
(Image by Gage Skidmore at flickr.com/people/22007612@N05/)   Details   DMCA
week's Capitol siege was a potential practice run for many of Donald Trump's most ardent supporters intent on committing domestic terrorism based on conspiracy theories, white grievance, and contempt for democracy.

According to an internal FBI bulletin, this final week of Trump's toxic presidency may be most violent, with armed demonstrations being planned for all 50 state capitols and "war" at the U.S. Capitol, extending through Joe Biden's inauguration on Jan. 20.

"The FBI received information about an identified armed group intending to travel to Washington, DC on 16 January. They have warned that if Congress attempts to remove POTUS via the 25th Amendment, a huge uprising will occur."

"We're keeping a look across the entire country to make sure that we're monitoring, and that our Guards in every state are in close coordination with their local law enforcement agencies to provide any support requested."

An invitation disseminated on social media describes the protests as an "armed march on Capitol Hill and all state capitols," urging attendees to "come armed at your personal discretion."

According to The Washington Post, an "online thread" "discussed specific calls for violence," including:

"Be ready to fight. Congress needs to hear glass breaking, doors being kicked in, and blood from their BLM and Pantifa [sic] slave soldiers being spilled. Get violent. Stop calling this a march, or rally, or a protest. Go there ready for war. We get our President or we die. NOTHING else will achieve this goal."

In response, Michigan has banned open carry inside its Capitol building, particularly in light of the armed domestic terrorists that stormed it in April opposing Covid-19, and the October plot to kidnap Michigan Gov. Gretchen Whitmer and put her on trial for treason.

"We will have a variety of assets prepared for any eventuality if the information that comes in between now and either the 17th or the 20th, or any other date for that matter, indicates the need for that kind of response. With the heightened sensitivity right now, to the extent there are demonstrations, you're going to see a much different, more vivid and visible posture than is typical."

The Washington Monument will be closed until January 24, and federal authorities have moved up the date of a planned lockdown for sections of the nation's Capitol by six days.

Capitol Police briefed Democrats on Monday about three more potentially upcoming lethal plots to surround the Capitol and assassinate Democrats and some Republicans.

Related Topic(s): Capitol; Police; Republican; Supporters; Terrorism; Trump; Warning, Add Tags
Add to My Group(s)
Go To Commenting
The views expressed herein are the sole responsibility of the author and do not necessarily reflect those of this website or its editors.