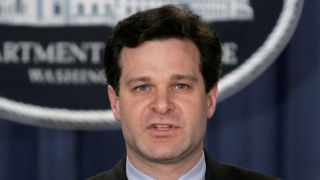 "If I am given the honor of leading this agency, I will never allow the FBI's work to be driven by anything other than the facts, the law, and the impartial pursuit of justice. Period. Full stop. My loyalty is to the Constitution and the rule of law. They have been my guideposts throughout my career, and I will adhere to them no matter the test." ~~ Attorney Christopher Wray, Congressional testimony, July 12, 2017

It's hard to get better lip service than that. In his opening statement, Christopher Wray, nominated by President Trump to be the next director of the FBI, pretty much said all the right things to the Senate Judiciary Committee on July 12. It's even possible that Wray's testimony could turn out to be true. But doubt is hard to allay in the context of his career to date.

President Trump announced his choice in a tweet on June 7: "I will be nominating Christopher A. Wray, a man of impeccable credentials, to be the new Director of the FBI. Details to follow." The 8:44 a.m. tweet came without prior notice to Congress and served as something of a distraction to that day's Senate testimony by James Comey, the FBI director Trump had fired on May 9.

The "impeccable credentials" are real enough in a very old line, establishment sort of way. Christopher Wray was born in New York City in 1966. His father was a partner in the well-connected law firm of Debevoise and Plimpton. His mother, Gilda Gates Wray, was a program officer at the Charles Hayden Foundation (American Red Cross, Museum of Natural History). Wray attended the Buckley School in Manhattan and Phillips Academy in Andover, Massachusetts. In 1989, Wray graduated from Yale College cum laude and married Helen Garrison Howell, also Yale '89. He graduated from Yale Law School in 1992, where he was executive editor of the Yale Law Journal.

After a federal judge clerkship, Wray went into private practice in 1993 at the Atlanta office of the King & Spalding international law firm. In 1997 he joined the Justice Department as a U.S. attorney in the Northern District of Georgia. In 2003, President Bush (Yale '68) appointed him the youngest-ever Assistant Attorney General in charge of the criminal division. In 2005, he returned to private practice at King & Spalding, where he was primarily a criminal defense lawyer who according to the website "helps clients navigate federal and state government investigations and litigation." With King & Spalding, Wray had broad experience "spanning a wide variety of industries and more than 30 different countries." As a partner at King & Spalding (where his partner pages are deleted), Wray is paid $9.2 million a year.

What did Wray know about US torture programs, and when did he know it?

Wray was there when Justice Dept. attorney John Yoo and others were drafting torture memos that were subsequently acted on by the Bush administration. In Senate testimony, Wray said with exquisite lawyerly caution: "To my recollection, I never reviewed, much less provided comments on or input on, and much less approved, any memo from John Yoo on this topic." He does not say he did not see or act on memos by others. He does not say he was not aware of his government's sanction of torture in violation of US and international law. He does not say he registered any objection to torture then. He did not, as head of the criminal division, bring any charges against any of the Bush administration torturers in 2003-2005. On leaving the department, he did receive a distinguished public service award.

He told the Senate on July 12: "I can only tell this committee that I have no recollection whatsoever of that, and it's the kind of thing I think I'd remember... My view is that torture is wrong, it's unacceptable, it's illegal, and I think it's ineffective." Reports that Wray visited the Guantanamo prison are apparently untrue, but the senators did not ask about it. Nor did they inquire about Wray's awareness of abuses including torture at the Abu Ghraib prison in Iraq, even though Wray appeared before the same committee in 2004 and was questioned by Vermont senator Patrick Leahy then. Wray's letter of May 6, 2004, about "Iraqi detainees at Abu Ghraib prison" remains redacted by the Justice Department.

In 2004, Wray was involved in the prosecution of a CIA contractor, David Passaro, whose beating of a prisoner in 2003 led to that prisoner's death within 48 hours. Passaro is the only US civilian prosecuted for prisoner abuse or torture. Wray is quoted in the indictment saying: "The criminal abuse of persons detained in the global war on terrorism will not be tolerated. The Department of Justice will move to punish those whose actions violate the rule of law. Such abuse violates the core principles of a free and just society." result of this prosecution was to convict one person and allow the programs of torture and abuse to continued, perhaps more carefully, but fundamentally unhindered." In this sense, Wray clearly seems to be part of setting up Passaro as a scapegoat.

Wray is credited with taking a principled stand against the Bush administration's illegal surveillance programs, albeit somewhat diaphanously. In 2004, Comey and then FBI director Robert Mueller (now special counsel) challenged the White House attempt to renew the National Security Agency (NSA) program of "terrorist surveillance," a euphemism for massive spying on just about every American citizen. According to reports, Comey and Mueller were prepared to resign in protest over the issue and Wray, getting wind of it, apparently asked to go with them if they went. The Bush administration blinked and Wray never went public, except by legend.

The American Civil Liberties Union (ACLU) has questioned Wray's record on civil liberties, much to the Senate's indifference. The ACLU cites with concern the FBI's past notorious abuse of civil liberties, up to and including burglaries and killings. In that context, Wray's strong support for the USA Patriot Act of 2001 and its expanded police state powers is less than reassuring. In 2003 Wray insisted that safeguards were in place and testified that "the Patriot Act has helped preserve and protect liberty and freedom, not erode them." In 2004 and 2005, two separate federal courts found parts of the Patriot Act unconstitutional. Subsequently, the inspector general of the Justice Department found widespread abuse by the FBI of Patriot Act powers.

What are Wray's Russian connections, other than Rosneft or Gazprom?

At King and Spalding in 2009, Wray described one American citizen client as an "energy company president in a criminal investigation by Russian authorities." On January 12, 2017, in the midst of the so-called Russia-gate hurly-burly, the private attorney removed this information from his law firm site where it was last reported on November 18.

Wray's 68-page questionnaire submitted to the Senate Judiciary Committee lists no potential conflicts of interest. Nor does the questionnaire list Wray's previous Russian-related client or any of his firm's representation of Russian state-run companies, or the word "Russian" in any other form or context. King & Spalding has half a dozen attorneys practicing in its Moscow office.

Vermonter living in Woodstock: elected to five terms (served 20 years) as side judge (sitting in Superior, Family, and Small Claims Courts); public radio producer, "The Panther Program" -- nationally distributed, three albums (at CD Baby), some (more...)
Related Topic(s): Christopher Wray; Dirty Political Tactics; FBI; Loyalty, Add Tags
Add to My Group(s)
Go To Commenting
The views expressed herein are the sole responsibility of the author and do not necessarily reflect those of this website or its editors.