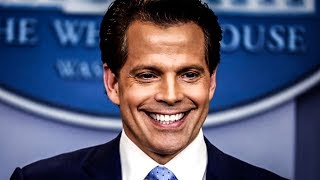 That's the way Reince went down the drain, with that epithet from The Mooch. Is it fascism yet? Can we go ahead and get that out there, with his new wall-lovin' Chief of Staff John Kelly? Is Tillerson next? Maybe The Donald can get Ted Nugent to step up to the plate at State. Then stick Newt or Rudy into Justice after he pushes that poor little elf onto his sword.

Why not? We have a taxpayer-funded White House Communications Director who makes Richard Pryor sound like Mr. Rogers. The Mooch is busy securing a fortune equivalent to the annual GDP of Puerto Rico from an illegal transaction with an unscrupulous Chinese corporation, but took time out to parody Priebus in an interview with the New Yorker:

"'Oh, Bill Shine is coming in. Let me leak the f**king thing and see if I can co*k-block these people the way I co*k-blocked Scaramucci for six months,' then implied Steve Bannon likes to suck his own co*k. Wow -- does he kiss his wife with that mouth? Well, not anymore -- she filed for divorce. Wish we could.

Where are we, Truthseekers?

We suffered 70 years under threat of nuclear war, and now we have Fu*ko the Clown (h/t Bob Alexander) as the only thing standing between us and the madman in North Korea. But never fear, The Don says we're winning. Is this what winning feels like? Huh, not what I expected. Purposely accelerating the demise of the Affordable Health Care Act out of spite because his "screw everybody" GOP plan couldn't pass?

"Let it Fail!" Tinyhands bellowed today at a gathering of law enforcement officers. So what if millions of Americans have their coverage ripped out from under them -- f*ck 'em, they shoulda voted for more Republicans! Mitch's poor constituents can pound Kansas corn up their cracks if they get sick, shoulda put the screws to the Turtle to make him whip those wimpy co*ksuckers in line! Tell those old biddie bitches to shut the fu*k up and vote like they're TOLD to vote, goddamit. And that crippled POW traitor, him too. It's their fault... don't blame me. Hell, even if my policy kills you -- doesn't matter, let it fail.

So much for all the "beautiful/bountiful/fantastic/huge/cheap" healthcare he promised his knuckle-dragging followers would flow like manna from heaven.

Oh, and fuggetabout those Russian sanctions, too. I got a shady multinational financial empire to protect, after all. I'm sicka hearing all that reporting about my cabinet from the lying media. They don't know sh*t. Hey, don't you want rich guys at the head of all those fu*ked up cabinet departments to make America rich like them?

You don't want a bunch of liberal losers like that illegal immigrant Obama had, right? So what -- my boys got no political experience, neither do I and look how fantastic I am! Only I can Make America Great Again, even if I have to fire all the seasoned public servants in DC! Drain da swamp, you hear me Reince? Sessions? The Mooch will fire you all. I'm the most presidential president since Lincoln, everybody says that. An' don't even think about my tax returns, Mueller, or the Mooch will visit you too...

Gleeful about the imminent ACA failure and ensuing national crisis, Tinyhands then praised those ICE agents for going all "Duterte" on immigrants, who may or not be here illegally. He does love a good dictator. The Don also sympathized with all the poor, maligned officers who had to deal with those Fake News media types who report on totally untrue incidents of police brutality or murder of (mainly black) often innocent suspects. "Don't be too nice" Trump suggested to the officers when dealing with possible gang members who might want to "slice and dice beautiful little girls." Then he returned to the White House to dine with Sean Hannity and some other members of the Fox Crime Family.

Again, where are we, Truthseekers?

They talk like stereotypical gangsters out of some 70's B-movie. (fingers crossed for a Joe Pesci's Mooch vs Melissa McCarthy's Spicy showdown on SNL). It would be funny if it wasn't so goddam terrifying.

Declared war on the LGBT community, immigrants, conservationists, the EPA, the media, science, most of Western Europe, and we have chaos in N. Korea, chaos in the middle east, chaos in Syria, chaos in Ukraine, chaos in our health care system, and this incompetent tangerine toddler has the football. Looks like Trump will soon add another first place to his ever-growing resume -- he's poised to kill more Americans than any president in history.

You're said it best, Donnie. It's gonna be so easy"

Kathy never expected a career in radio as a talk show producer. Born and raised in Atlanta, Georgia, Kathy was completing her nursing degree when in 2001 - in an emergency - she was asked to fill in as the producer of Mike's program. Within a few (more...)
Related Topic(s): Anthony Scaramucci; Chaos; Crime; Donald Trump Lies, Add Tags
Add to My Group(s)
Go To Commenting
The views expressed herein are the sole responsibility of the author and do not necessarily reflect those of this website or its editors.