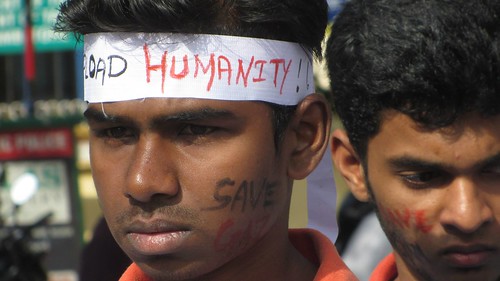 WRITE DOWN: I, Uri Avnery, soldier number 44410 of the Israel army, hereby dissociate myself from the army sharpshooters who murder unarmed demonstrators along the Gaza Strip, and from their commanders, who give them the orders, up to the commander in chief.

IS MY government committing "war crimes" along the border of the Gaza Strip?

It seems that officials of the International Criminal Court believe that the acts of our soldiers do constitute war crimes. They demand an international investigation.

To prevent that, our army command proposes an Israeli military investigation. That is manifestly ridiculous -- an army investigating itself about acts committed on direct orders of the Chief of Staff.

As was published in advance, sharpshooters were posted along the border fence and ordered to kill "ringleaders" of the unarmed protesters on the other side of the fence. The Gaza leadership had announced that these unarmed protests were to take place every week, after Friday prayers, until Naqba Day.

During the first two Fridays, 29 unarmed people were shot dead and more than a thousand wounded by sharpshooters.

Since I was a member of that army on the day of its foundation, I think that it is also a crime against my comrades and me.

THIS WEEK a short video, recorded by a soldier at the time of such an action, was widely seen in Israel.

It shows the action from the angle of a soldier who was obviously standing next to a sharpshooter. The sharpshooter sees the demonstrators from a distance of hundreds of yards. The hairs of his sights move at random, than settle on an individual. He shoots. The person drops on the spot.

A joyous cry "Yesh" is heard all around from unseen soldiers who have been watching. "Yesh" means "got him," a jubilant yell, such as would accompany a hunter's success in killing a rabbit.

Many hundreds of thousands of Israelis have seen this film by now, since it was shown for the first time on TV. Except for a few articles and letters to the editor (in Haaretz), there has been no protest.

Related Topic(s): Gaza Massacre; Israel; Killing; Murder; Palestinian; Peaceful Protest; Soldiers, Add Tags
Add to My Group(s)
Go To Commenting
The views expressed herein are the sole responsibility of the author and do not necessarily reflect those of this website or its editors.