As scientists laid bare the impacts of climate change, the oil and gas giant said climate policies are highly unlikely to stop it digging up fossil fuels. So what are we going to do about it? 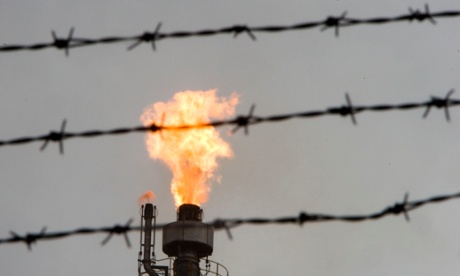 Copyrighted Image? DMCA
Monday saw the release of the latest climate report from the planet's scientists. Predictions of famine, flood, and so on -- mostly what we already knew, in even more striking language.

But Monday also saw the release of another document somewhat less expected, and probably at least as important in the ongoing battle over the future of the atmosphere and hence all of us who live in its narrow envelope.

Here's the backstory. For 18 months now, some of us have been campaigning for colleges, churches, cities and the like to sell their shares in fossil fuel companies, on the grounds that their business plans call for burning far more carbon than scientists believe the planet can safely handle. It's become the fastest growing divestment movement in history -- but some have tried to reach out to the industry and reach a middle ground instead, hoping to reform them instead of simply trying to break their power.

Profound thanks are due, then, to those shareholder activists who urged "constructive engagement" with the oil, gas and coal barons.

Because those organizations, groups like As You Sow, CERES, and the Interfaith Center on Corporate Responsibility, managed in very short order to get Exxon Mobil, the leader of the fossil fuel industry, to show its cards. In fact, in a truly historic moment, Exxon Mobil turned over the whole deck -- and to its credit it showed it has nothing up its sleeve, no tricky rhetoric or sleight of hand. Just endless amounts of oil and gas.

On Monday the company issued two reports, in formal response to a shareholder resolution that demanded they disclose their carbon risk and talk about how they planned to deal with the fact that they and other oil giants have many times more carbon in their collective reserves than scientists say we can safely burn.

The company said that government restrictions that would force it to keep its reserves in the ground were "highly unlikely," and that they would not only dig them all up and burn them, but would continue to search for more gas and oil -- a search that currently consumes about $100 million of its investors' money every single day. "Based on this analysis, we are confident that none of our hydrocarbon reserves are now or will become 'stranded,'" they said.

This is an honest reply. It is as honest as the report that emerged the same day from the world's climate scientists, which demonstrated that if Exxon Mobil and its ilk keep their promise to dig up their reserves and burn them, then the planet will no longer function effectively.

Some of us, cynically, thought all along that this would be Exxon's posture. The company, after all, poured millions into denying climate science when that was still possible. That's why we've been calling for divestment.

We've never thought that there was a small flaw in their business plan that could be altered by negotiation; we've always thought their business plan was to keep pouring carbon into the atmosphere. And indeed Exxon's statements are easy to translate: "We plan on overheating the planet, we think we have the political muscle to keep doing it, and we dare you to stop it." And they're right -- unless we build a big and powerful movement, they'll continue to dominate our political life and keep change from ever taking place.

So now, with that information clearly on the table, it's time for college boards and foundation heads, church denominations and city mayors to act and act firmly. By divesting -- by announcing that they are breaking ties with these companies -- they will begin the process of politically bankrupting them. Of taking away the social license that allows them to act with such consummate arrogance, on the very day that the planet's scientists laid bare the impact of climate change on everything from crop yields to civil wars.

It's never fun to see one's cynicism confirmed. But Monday was a day for reality, on the scientific front but also the political, economic, and corporate.

The only open question left is what we're going to do about it.

Bill McKibben is the author of a dozen books, including The End of Nature and Deep Economy: The Wealth of Communities and the Durable Future. A former staff writer for The New Yorker, he writes regularly for Harper's, The Atlantic Monthly, and The (more...)
Related Topic(s): Climate Crisis; Exxon Mobil Oil; Predictions, Add Tags
Add to My Group(s)
Go To Commenting
The views expressed herein are the sole responsibility of the author and do not necessarily reflect those of this website or its editors.