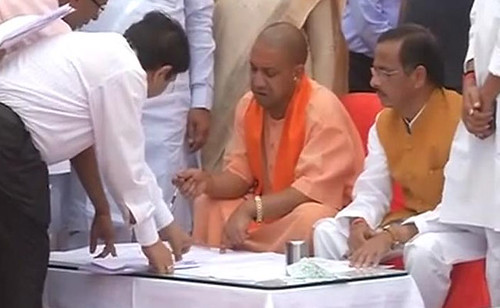 The Uttar Pradesh (UP) state government of Yogi Adityanath continued allowing police encounters since BJP came to power in the state in March 2017, Caravan News of India reported Monday (Feb. 26, 2018).

In 10 months of its regime, the state police conducted 1038 encounters killing 32 alleged criminals, and the Yogi government has officially boasted of these killings. But families of many of the victims have come out alleging that their dear ones were killed in staged shootouts. Investigative journalist Neha Dixit visited families of 14 of the people killed in the alleged encounters.

Furquan was one of them. In her long piece published in The Wire, she wrote chilling graphic details about how Furquan and 13 others were separately gunned down, according to Caravan. Furquan, 40, showed up unexpectedly at his home in Shamli on October 8, 2017, full seven years after he was arrested and put in the Muzaffarnagar jail for his involvement in a village brawl.

His sons, aged 12 and 10, could not recognize him because they were just 5 and 3 respectively when he was sent to jail. "We did not have the money or a guarantor to get him released so we were surprised that he was out," says Nasreen, his wife.

The villagers informed her that a week back, the police came to the village to negotiate a settlement with the complainants in Furquan's case. That is how he was released. Two weeks later, on October 23, 2017, he was shot dead by the police in an 'encounter'.

The police claimed he was involved in a large number of dacoities in Saharanpur, Shamli and Muzaffarnagar. "I want to ask two things", says Nasreen. "One, when he was in jail for seven years, how come he was also part of these dacoities? And two, why did the cops negotiate his release on their own, when they only wanted to kill him? Were they looking for an scapegoat?"

In the last 10 months, the National Human Rights Commission (NHRC) has issued three notices to the Yogi government over allegations of fake encounters but encounters have continued unabated.

NHRC had issued first notice in October 2017, then in November 2017 and the latest one in the first week of this February. Through its November 22 notice, the NHRC had strongly condemned the state government of Yogi Adityanath for endorsing killings in encounters.

The NHRD had issued notice following the government officially admitted that 433 encounters had taken place in the state in the previous six months (March -- Sept 2017) killing 19 alleged criminals. The state government had described the encounters as an achievement and a proof of improvement in the law and order situation.

Chief Minister Yogi Adityanath was quoted, in a newspaper on the 19th November, 2017, saying that "Criminals will be jailed or killed in encounters". Security forces abuses and lack of accountability

According to Human Rights Watch report of 2017, Indian law makes it difficult, if not impossible, to prosecute public officials. Section 197 of the Criminal Procedure Code bars courts from recognizing any offenses (except sexual offenses) alleged to have been committed by public servants in the discharge of their official duties unless the central or a state government permits prosecution.

In August, a special court discharged Gujarat police officer Rajkumar Pandian from a 2005 extrajudicial killing case under this provision. Pandian was the 12th defendant to be discharged in the case.

Despite calls for repeal of the Armed Forces Special Powers Act, soldiers continue to have immunity from prosecution when deployed in areas of internal conflict. In July 2016, however, the Supreme Court of India, in a decision ordering an investigation into 1,528 cases of alleged extrajudicial killings in Manipur state, ruled that the AFSPA does not provide immunity to security force personnel who use excessive or retaliatory force, and that every alleged extrajudicial killing should be investigated. The confession of a Manipuri policeman in January that he had acted on orders to kill more than 100 suspected militants between 2002 and 2009 exposed how police had adopted illegal practices long associated with the army and paramilitary forces.

A US Congressional Commission held a hearing in June 2016 on the human rights situation in India, coinciding with Modi's visit to Washington. The hearing spotlighted issues of violence against marginalized communities and religious minorities such as Muslims and Christians.

Author and journalist. Author of Islamic Pakistan: Illusions & Reality; Islam in the Post-Cold War Era; Islam & Modernism; Islam & Muslims in the Post-9/11 America. Currently working as free lance journalist. Executive Editor of American (more...)
Related Topic(s): Amnesty International; Extra Judicial Killings; Human Rights Watch; Immunity; India; Security, Add Tags
Add to My Group(s)
Go To Commenting
The views expressed herein are the sole responsibility of the author and do not necessarily reflect those of this website or its editors.