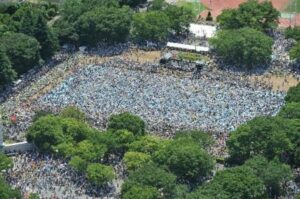 The news from the Fukushima disaster only trickles into the US media market, but what we do hear is devastating. Birds dropping from the sky, deformed fish and insects, and let's not forget the implications across the Pacific: "The Helmholtz Centre for Ocean Research Kiel released model simulations on the long-term dispersal of Cs-137 released into the Pacific Ocean off Fukushima on 7/6/2012. According to their simulation, the West coast of the North American continent will be the most contaminated by Cs-137 in 10 years" according to environmental scientists around the globe.

And what is the feeling from Japanese officials? They're ready to restart their 50 nuclear reactors, of course! At least 170,000 Japanese citizens think this is a really really bad idea, however, and took to the streets in protest:

"Tens of thousands of protesters gathered in central Tokyo Monday in the biggest demonstration so far against government plans to restart the nation's nuclear reactors, which were gradually shut down in the wake of last year's March 11 disaster at the Fukushima Daiichi plant.

"With local temperatures breaching 90 degrees Fahrenheit (32 Celsius) on a sunny national holiday -- Marine Day -- organizers claimed 170,000 people from all over Japan, including some who traveled by bus from the Fukushima district, gathered to attend a good-natured rally starting at Tokyo's leafy Yoyogi Park.

"'Politicians say they are putting people's lives first, but those are just the words they use for their strategy and don't carry any substantive meaning,' said Goro Nakazawa, 33, a musician from Tokyo's Koenji neighborhood. 'In the name of the economy, this kind of tragedy (at Fukushima Daiichi) has happened...Life is more important than the economy.'"

Kathy never expected a career in radio as a talk show producer. Born and raised in Atlanta, Georgia, Kathy was completing her nursing degree when in 2001 - in an emergency - she was asked to fill in as the producer of Mike's program. Within a few (more...)
Related Topic(s): Corporate; Extinction Level Event; Fukushima; Rally; Scientists, Add Tags
Add to My Group(s)
Go To Commenting
The views expressed herein are the sole responsibility of the author and do not necessarily reflect those of this website or its editors.