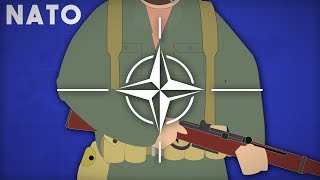 NATO and NATO member states, separately and together, destroy non-belligerent countries as policy. They destroy the rule of international law, they destroy socially uplifting economies, they destroy democratic political economies, they create millions of refugees, and their wars of aggression impose the death penalty on millions.

NATO committed these crimes against the former Yugoslavia, Afghanistan, Iraq, Libya, Syria, Ukraine, and beyond.

We in the West are responsible for this. We are the brutal, globalizing dictators[1].

These imperial wars of aggression kill, brutalize, and diminish, men, women, and children. There is not anything humanitarian about NATO wars. These wars have been, and are being, sold to gullible domestic populations by ubiquitous criminal war propaganda[2].

When Westerners enlist for the military, they are killing, and dying, and being crippled (mentally and physically), based upon war lies.

As NATO and its allies destroy sovereign states and their peoples, we are all diminished and impoverished. The political economies advanced by NATO are predatory and dictatorial. Prey countries become enslaved to imperial diktats. Increasingly, too, transnational agencies of imperialism driven by publicly bailed-out monopoly "capitalism", and failed neoliberal economic schemes[3] impose "internal imperialism" on domestic populations. Countries such as Canada are losing their sovereignty and increasingly becoming "treatied substates"[4], subservient to failed, impoverishing, neoliberal economic ideologies and globalizing military alliances such as NATO.

Canada needs to break free from NATO's impoverishing, imperial diktats. We need a sovereign, independent foreign policy. It can be done, and it should be done. Article 13[5] of the NATO constitution provides us with the legal mechanism to do so.

NATO Is an Appendage of the U.S. Empire

All we need is the political will for peace, justice, and sovereignty to make it happen.

Related Topic(s): Globalization; Refugees; Syria, Add Tags
Add to My Group(s)
Go To Commenting
The views expressed herein are the sole responsibility of the author and do not necessarily reflect those of this website or its editors.