Some redactions in the document, they tell The BRAD BLOG, appear solely to protect government, not national security...

"The very word 'secrecy' is repugnant in a free and open society; and we are, as a people, inherently and historically opposed to secret societies, to secret oaths and secret proceedings," President John F. Kennedy declared to the American Newspaper Publishers Association at New York's Waldorf-Astoria in 1961.

"No official of my Administration," he continued, "whether his rank is high or low, civilian or military, should interpret my words here tonight as an excuse to censor the news, to stifle dissent, to cover up our mistakes or to withhold from the press and the public the facts they deserve to know."

But, that was then.

The U.S. government's legal requests for secret surveillance are, themselves, filed in secret at the secret Foreign Intelligence Surveillance Court (FISC), and the FISC's rulings on those secret requests are themselves a secret as well.

Last week, however, after more than a year of legal wrangling and lawsuits, the non-partisan Electronic Frontier Foundation (EFF) was finally successful in gaining the public release of one of those secret rulings, an October 2011 decision by the Court finding that the government had, on several occasions, offered the Court "a substantial misrepresentation regarding the scope of a major collection program ... buttressed by repeated inaccurate statements."

At the very same time, as they were about to be compelled by a court to release the decision EFF sought, the U.S. Director of National Intelligence James Clapper, "in the interest of increased transparency," released two other redacted court decisions as well. In all, they revealed the NSA's illegal and unconstitutional collection of the emails of tens of thousands U.S. citizens who had nothing to do with terrorism investigations. The documents were all posted on a new Tumblr website created, Clapper said in a statement posted to the site, "to provide the public with direct access to factual information related to the lawful foreign surveillance activities carried out by the Intelligence Community."

As expected, some sections of the October 2011 FISC decision were heavily redacted. Other parts, while redacted, were revelatory nonetheless about the nature of our government's secret surveillance programs. And still other portions seem to be redacted for no legitimate national security reason at all. As a number of national security journalists, FOIA advocates, security veterans and whistleblowers describe to The BRAD BLOG, the reason for some of the redactions appears to be little more than an attempt to keep the government from embarrassing itself -- or even from revealing evidence of its own crimes.

Here's one of the more disturbing revelations, from a footnote, in the previously secret October 2011 FISC decision...

Here's one of the more heavily redacted portions of the previously secret 85-page ruling that rejected a secret surveillance request by the government, after determining that the government had repeatedly misled the Court in its secret filings... 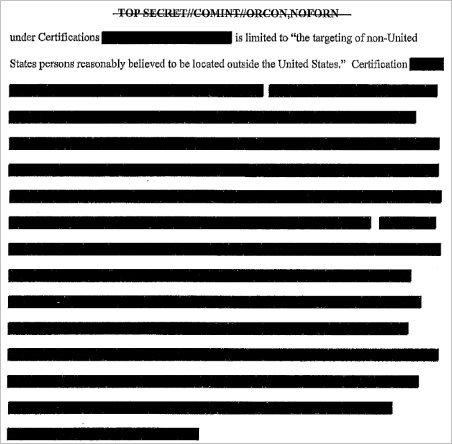 But here is one snippet about which we specifically requested comment from a number of national security journalists, FOIA advocates (including the EFF) and former national security agency veterans and whistleblowers. Note, just for now, the one sentence highlighted in yellow...

Brad Friedman publishes Bradblog.com
Related Topic(s): NSA; Released Documents; Secret Ops; Surveillance, Add Tags
Add to My Group(s)
Go To Commenting
The views expressed herein are the sole responsibility of the author and do not necessarily reflect those of this website or its editors.