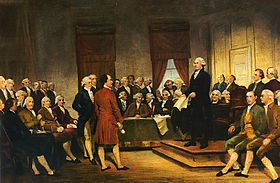 "The Constitution," Alan Dershowitz claims, "allocates to the president sole authority over foreign policy (short of declaring war or signing a treaty). "

Dershowitz makes that claim by way of defending US president Donald Trump against conviction in the Senate on two articles of impeachment.

More specifically, he disputes the Government Accountability Office's claim that Trump violated the law when he used pending foreign aid to extort Ukraine's president into investigating a political opponent.

According to GAO, the Impoundment Control Act "does not permit the president to substitute his own policy priorities for those congress has enacted into law ."

According to Dershowitz, the Act "does not permit Congress to substitute its foreign policy preferences for those of the president."

Where in the Constitution do we find the "allocation" Dershowitz refers to? He doesn't say, for good reason: The actual Constitution, unlike the one in Dershowitz's imagination, agrees with GAO.

The Constitution empowers Congress, not the president, to "regulate commerce with foreign Nations."

The Constitution empowers Congress, not the president, to "define and punish Piracies and Felonies committed on the high Seas, and Offenses against the Law of Nations."

The Constitution empowers Congress, not the president, to "declare War, grant Letters of Marque and Reprisal, and make Rules concerning Captures on Land and Water."

The Constitution empowers Congress, not the president, to "provide for calling forth the Militia to ... repel Invasions."

The Constitution empowers the president to negotiate treaties -- but those treaties require Senate ratification.

The Constitution empowers the president to appoint ambassadors and a Secretary of State -- if the Senate approves of his choices.

The Constitution makes the president commander in chief of the armed forces, but only when they're "called into the actual service of the United States" by Congress.

In Federalist 69, Alexander Hamilton -- arguing for the Constitution's adoption -- cites most of the items above the president from a British-style monarch:

Related Topic(s): Alan Dershowitz; American Foreign Policy; Constitution The; Executive Power Expansion; Impeachment; Trump, Add Tags
Add to My Group(s)
Go To Commenting
The views expressed herein are the sole responsibility of the author and do not necessarily reflect those of this website or its editors.