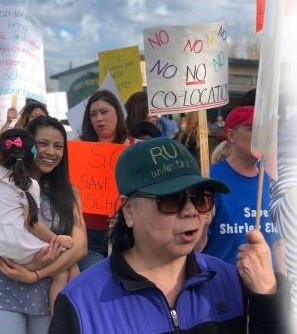 The arrival of spring brings with it the annual fight over charter school co-locations within the LAUSD. Under terms hidden in Proposition 39, which the voters passed in order to reduce the threshold needed to approve bond funding, these privately operated schools have the right to demand space on public school campuses. Recognizing the disruptions that this will cause for the education of their children, parents at the schools targeted for invasion often attempt to organize community support for keeping their campuses intact. However, this year's April 1 deadline for the LAUSD to make offers to charter schools who had requested schools came as COVID-19 had trapped most people inside their homes in an attempt to flatten the curve, silencing their voices in this debate.

Continuing the alliance that brought a successful end to last year's strike, UTLA backed the parents of threatened schools with a letter to Superintendent Austin Beutner and the LAUSD School Board demanding "that LAUSD halt all new proposed charter co-locations for the 2020-21 school year." They also renewed their call for a moratorium on new charter school approvals "until such time that our communities affected by COVID-19 have been cleared by the California Department of Health Services (CDPH) to safely participate in public meetings, per the Brown Act, that discuss any consideration of new charter school approvals."

Recognizing that when students eventually return to their classrooms, "each school will have to rapidly learn and adapt to new [health] standards to keep students, educators and families safe", the union also demanded greater scrutiny of charters currently co-located on LAUSD campuses. The proposed steps included assessing campus safety protocols, vigorous reviews of charter school health and safety practices and support of joint co-location committees to ensure on-going dialog and collaboration. UTLA also asked for a guarantee that each school that is already being used as a co-location will receive the staffing levels needed to ensure that nurses and custodial staff can maintain safe and healthy school environments.

The California Charter School Association (CCSA) responded with a letter that ended with "let's focus on kids and families, instead of politics as usual, so we can meet this moment together," which is inspirational in times as challenging as these. Unfortunately, everything that came before this call to action in their letter was reflective of the dirty politics that has come to represent this unelected trade organization that gave us the LAUSD convicted felon Ref Rodriguez, the North Valley Military Institute and the theft of scarce education funds from public school students.

While the letter from UTLA makes no mention of shutting down existing charter schools, CCSA engaged in its usual use of fear-mongering stating that the union had called for a "charter school ban." As if to acknowledge that charter schools cannot operate if made to conform to the rules that govern public schools, the charter school industry conflated increased regulation with demanding "the eviction of charter students and teachers from the learning space provided to them". The call to ensure that the district protects the health and safety of all students was turned into the labeling of "charter students, families, and staff as unique hazards to public health". The CCSA switched the call for a temporary "moratorium" into a demand "for a charter school ban."

The CCSA finds fault with referring to charters that force their way on to the public school campuses as "invaders," but seem to avoid any recognition of the fact that this is what it feels like to schools who must share space against their will. Nor did the charter school organization give any recognition to the harm caused to LAUSD students by the implementation of Prop 39. They state that "we must use every ounce of skill, talent, courage, empathy, and love we have to better support the families we serve," but that is a mission statement that should live on long after this crisis has subsided. Public school families are not served when space used for computer labs, robotics, art, music, working one-on-one with students, afterschool programs, parent centers and Mommy and Me classes is taken away so that a new charter school can set up shop. "Students with Disabilities, English Learners, and students struggling with a digital divide" should not be "forgotten in this crisis." They must also be served after children return to school and these students should have complete access to rooms for psychological services, adaptive physical education, interventions, speech therapy, occupational therapy, and physical therapy. The CCSA considered them unused rooms that can be repurposed for their needs.

The CCSA is correct in asserting that the crisis gives us "a unique opportunity to lift Los Angeles up and support our city in the face of crisis." However, in order to do so, the politics of lies and deception needs to be stopped. The charter industry needs to own up to the harm that their schools cause to the 80% of students who attend public schools and roll up their sleeves to work with UTLA and the District to find ways to repair this damage. 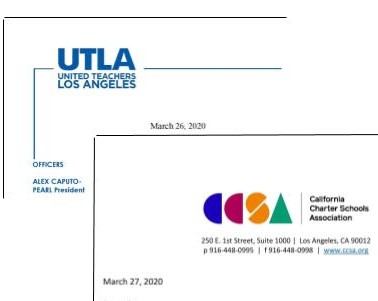 AUTHOR'S NOTE: In order to get the views of the four remaining school board candidates on the issues surrounding Prop-39, Scott Schmerelson, Marilyn Koziatek, Patricia Castellanos, and Tanya Ortiz Franklin were all sent the following questions: