Google ad policies define this article as NOT acceptable, so Google refuses to show Google ads on this page. We depend upon advertising revenues to survive.

Since Google refuses to show ads on this content, we're asking you to override Google's decision and help us survive by 1) donating to OpEd News or 2) becoming a Paid Member of OpEd News. (Know that if we had sufficient income, we wouldn't use Google ads at all.) 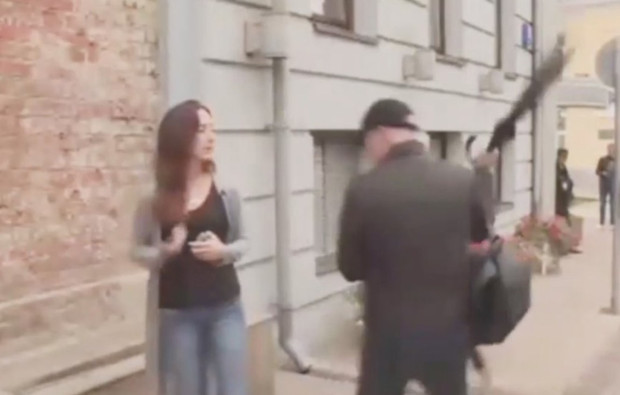 Vadim Manukyan interviewed me regarding an incident that happened last Saturday.

I'm sure the title in Russian flowed better. I did amend it slightly to note and highlight that I was NOT attacked by a Russian, but likely an American/israeli.]

**Please note: everyone I've met in Moscow, in Russia generally, has been *extremely* kind and helpful. The person who abused me had likely an American accent and Zionist motivations. I'm mainly posting this to both show ugly Zionism. This incident has delayed me a little in finishing off two important projects, but only due to the incident itself and taking the time to file a complaint with police**

"Canadian journalist and blogger Eva Karene Bartlett came to Russia for tourism, journalism, including on the Moscow protests, and also to visit Crimea and Donbass.
It was she who owned the famous phrase about Moscow 'opposition':

'These are the most apathetic of all the protesters in the world that I have seen."

[*Note: My emphasis on apathy was NOT any call to violence, it was noting the lack of interest protesters displayed, compared to passionate and vibrant protests I've witnessed elsewhere, like Caracas for example.]

"The journalist wrote about this on her Facebook page after attending an agreed rally on Sakharov Avenue in Moscow on August 10.

A week later, on August 17, Eva Bartlett was going to cover the next illegal "walks" of the protesters. But Eva's plans were suddenly hindered by an aggressive stranger who attacked her on a street in the center of Moscow, during an interview. The attacker shouted not only insults, but also anti-Russian slogans. The journalist connects this attack with her independent position on many topical issues of both the Russian and world agendas."

[NOTE: See my FB post about this, including a video of the abuse and another video, from 12 years ago in occupied Palestine, of similar Zionist vitriol.]

Member of the expert council on the development of the information society and the media under the State Duma of the Russian Federation, blogger Vadim Manukyan specifically for the Federal News Agency found out from Eva Bartlett the details of this unpleasant incident.
-VM: On August 17, when you were giving an interview, an aggressive man attacked you and did not stop at verbal abuse: he pushed you and hit you with an umbrella. Who could it be?

-EB: I can't say definitively who he is. He seemed to have an American accent and insinuated that he had lived in Tel Aviv. Beyond that, I can't say.

Related Topic(s): Journalism; Palestinian; Protest; Syria; Zionists, Add Tags
Add to My Group(s)
Go To Commenting
The views expressed herein are the sole responsibility of the author and do not necessarily reflect those of this website or its editors.