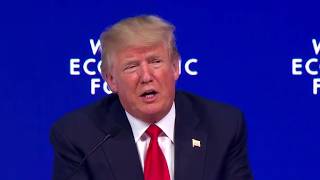 Trump gets BOOED after Slamming the Press at Davos 2018
(Image by YouTube, Channel: CasonVids)   Details   DMCA

US President Trump swung into the snow-capped Alpine resort of Davos with expectations of a cool reception from the assembled political and financial leaders. "Into the lion's den," said one news anchor, as Trump brought his "America First" agenda to the annual World Economic Forum, which is associated with "globalism" and the supposed antithesis of Trump's nationalism.

One got the impression, however, that sections of the American media which are anti-Trump were trying through wishful thinking to contrive a stand-off between the US president and the Davos cabal. A stand-off along the following line: Trump is the uncouth rightwing populist pushing economic protectionism and anti-immigration policies, while the Davos illuminati are somehow urbane, liberal, internationalist and progressive.

Such contrived difference between Trump and the supposed enlightened elite on a Swiss mountaintop seems wildly overblown.

The corporate and political oligarchs assembled at Davos have much more in common with Trump than what purportedly divides them. Any difference is more to do with rhetorical style, rather than substance. Trump is just more boorish in his manner, while the other elites are more adept at concealing their oligarchic affiliations with palatable rhetoric. Trump's $1.5 trillion tax giveaway at the end of last year, for example, will have suited the Davos corporate set very nicely indeed.

No more evident of this contrived, false stand-off in Davos was the supposed divergence between European political leaders and Trump. The American media seem to have an overestimated view of French President Emmanuel Macron and German Chancellor Angela Merkel as champions of liberal internationalism, and thereby, putatively, countervailing political forces to "Trumpism".

Before Trump arrived at Davos -- the first US president to do so in nearly two decades -- Merkel and Macron had delivered speeches to the assembled hobnobs projecting Europe as a vital counterpoint to Trump. Macron reportedly made jokes implicitly contrasting Trump's denial of global climate change with the supposedly progressive policies of France.

Merkel made a pitch for Europe to assume global leadership since, she said, America under Trump was retreating into isolationism and the "poison" of protectionism and rightwing populism.

Such anti-Trump posing is sheer vanity. The global capitalist elite and their servile politicians are just trying to make themselves out somehow more caring and humane by using Trump as a supposed polar opposite from them. But the difference is illusory.

For example, the European Union is implementing anti-immigration policies that far outstrip those of Trump. Germany and France, in particular, are implementing fast-tracked repatriation of African migrants, dumping them back to Libya and an unknown fate.

In France, Macron is pushing through draconian labor laws that will cut protections for workers and give more power to capital to hire and fire.

What is so progressive about these European leaders?

As for the much-touted "standing up to Trump" notion, this week away from the rarefied atmosphere of the Swiss resort, the European governments were acceding to Washington's demands for re-writing the Iran nuclear deal.

Iran has warned that the 2015 international accord is not re-negotiable.

Since Trump entered the White House last year, he has taken every opportunity to undermine the landmark nuclear agreement, threatening to walk away from if it is not "fixed" according to his pro-Israeli hawkish demands. Trump wants the accord to be amended with restrictions on Iran's non-nuclear ballistic missile defenses, and giving even greater access for international inspectors to Iranian military sites.

Related Topic(s): Davos; Europe; International; Trump Hypocrisy, Add Tags
Add to My Group(s)
Go To Commenting
The views expressed herein are the sole responsibility of the author and do not necessarily reflect those of this website or its editors.