Philadelphia District Attorney Seth Williams, the top prosecutor with a tarnished reputation for turning a blind-eye to following ethics rules, has clearly seen the proverbial handwriting on the wall.

Williams, a few days ago, announced that he would not seek reelection to a third term. That surprise announcement evidenced belated recognition by Williams that his quest for reelection would be an uphill struggle if not an impossible mission thanks to fallout from his many ethical failings and questionable practices, as well as ongoing criminal investigations into his finances by the FBI and IRS.

That DA career-ending announcement by Williams came weeks after Philadelphia's Ethics Board slapped this once promising and popular politician with a $62,000 fine for his failure to file mandatory financial disclosure forms for five years. His fine -- the largest ever levied by Philadelphia's Ethics Board -- faulted Williams for not reporting over $160,000 in gifts that included fancy vacations and expensive jewelry, including from attorneys with clients prosecuted by Williams' office.

Williams claimed, improbably, that he merely forgot to file the mandatory disclosure forms from 2010 to 2015.

But that claim fails the laugh test because Williams once served as Philadelphia's Inspector General, the post tasked with ethics rule enforcement. During his announcement about withdrawing from reelection, Williams apologized for the embarrassment and shame he brought on the District Attorneys Office.

Williams' re-election prospects were already in doubt due to erosions of support among his core constituency in the black community and his calculated ultimately unsuccessful effort to cultivate support from Philadelphia's police union. That labor organization, the Fraternal Order of Police, has a history of reflexively backing police brutality and misconduct that primarily impacts blacks in the so-called City of Brotherly Love.

In recent weeks the FOP launched attacks on Williams arising in part from his decisions not to prosecute civilians who had questionable confrontations with police officers. Those FOP attacks included an anti-Williams billboard on the major interstate highway that runs through the center of Philadelphia. 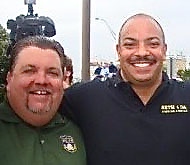 Meanwhile, Philadelphia's NAACP branch recently blasted Williams for failing to prosecute three white men involved in a fatal building collapse while gaining the convictions of two poor black men connected with that incident. A civil trial jury in that building collapse recently found that the men Williams refused to prosecute were most responsible for that fatal incident. That jury verdict produced a settlement providing nearly a quarter of a billion dollars in damages to victims of that collapse.

Williams was already under fire in Philadelphia's black community for his prosecution of five black state representatives for their failure to report gifts on financial disclosure forms --- the same failure that Williams committed which led to his record-setting Ethics Board fine.

The total value of all 'gifts' received by those five legislators was less than half of the value of just one gift Williams received in 2013: $45,000 worth of roofing repairs on his home.

Autopsies of Williams' fall from grace in Philadelphia's news media fail to note a failing that produced international condemnation of this top prosecutor: his repeated, gratuitous assaults on imprisoned Philadelphia journalist Mumia Abu-Jamal, a Philadelphia journalist widely considered to be an American political prisoner because of how politically corrupted his trial and appeals process has been.

One such assault came in early 2014 when DA Williams, a Democratic, aligned himself with Tea Party Republican Pennsylvania U.S. Senator Pat Toomey to help torpedo President Obama's nomination of a respected lawyer to head the Civil Rights Division of the U.S. Justice Department.

Related Topic(s): Brutality; Ethics; Justice; Obama; Race African American Black Negro; Scandal; Violations, Add Tags
Add to My Group(s)
Go To Commenting
The views expressed herein are the sole responsibility of the author and do not necessarily reflect those of this website or its editors.