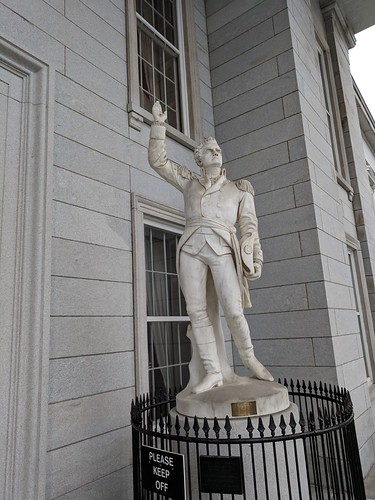 Ethan Allen, a reckless hero of the American Revolution, was just as reckless in attacking Christianity, which he called "superstition" in an unruly book.

A New England resident, Allen actually rebelled before the Revolution. A 1770 dispute over land grants threatened settlers with loss of their farms. They raised a defense regiment called the Green Mountain Boys, with Allen its colonel. The British governor of New York declared him an outlaw and put a price on his head. The settlers held the governor's forces at bay.

When the Revolution broke out, the Green Mountain Boys joined the action and overwhelmed the British garrison at Fort Ticonderoga. Then Allen made a foolhardy attempt to capture Montreal, but was captured himself and sent to Eng­ land as a prisoner. Later, he was released.

Allen was a freethinker. At his wedding, the ritual required him to pledge "to live with Fanny Buchanan agreeable to the laws of God." Allen halted the ceremony in protest. Only after it was specified that his pledge meant the god of nature, as envisioned by Deists, did he proceed.

Before the war, Allen had worked with a fellow skeptic, Dr. Thomas Young, in drafting a book. But Young died, leaving the work unfinished. After the war, Allen revised the manuscript and published it under his name alone as Reason, the Only Oracle of Man. It was a scathing assault on Calvinist Christianity. The clergy seethed in anger. One minister published a verse rebuke:

The seer of Antichrist descends

In gentle lands of Susquehanna."

Related Topic(s): Books; Boys; Christianity; God; Green; History; Revolution; Rights; Science; Superstition, Add Tags
Add to My Group(s)
Go To Commenting
The views expressed herein are the sole responsibility of the author and do not necessarily reflect those of this website or its editors.