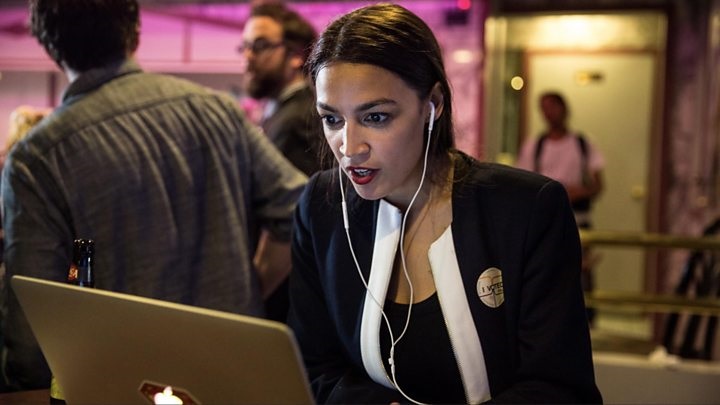 I was disappointed by the attacks on Alexandria Ocasio-Cortez for her successful opposition and political action against the Amazon. Of course, she was not alone. The fact is until the government stops corporate extortion they will continue to drain our coffers, a direct transfer of wealth to the top. While many complain about the loss o 25,000 jobs, they fail to see the externalities that may have made the job gains moot.

The fight to ensure everyone toes a certain line is on and it is dangerous. Millennials represent the delta that turned a wave that was becoming tepid into a solid Blue Wave. Here is a warning to Establishment Democrats. Do not screw it up.

2020 is the year Democrats must get a spine. It is no time to run to the center by once again disregarding millennials and a large part of their natural base. And for those scrutinizing Alexandria Ocasio-Cortez, here is a message to you. Stop it.

Jim Rigby, a Facebook friend, and pastor in Austin said it best in a piece he wrote on his wall.

Here are a few suggestions on how to hear the context from which Rep. Ocasio-Cortez is speaking to us:

She is speaking as a radical: When Ocasio-Cortez uses the word "radical" she does not mean "extremist." She means someone who tries to get past political dualisms and find the "roots" of our problems. That means she believes the answer to our problems cannot be found by polarizing our corrupt system and choosing the better of the two sides. A "radical" isn't fooled by political labels. Instead of a melodrama of the good team against the bad team, a "radical" analyses the system itself and asks simply who has power and who doesn't.

Someone who values principles over their own party is not a traitor to that party. They are what we used to call a "statesman." This young "stateswoman" understands that getting rid of Trump is essential. She is not making a false equivalence between the parties. She is looking for the "roots" of a common standard that will be fair to everyone, especially the most vulnerable. Most all of us agree the system is rigged, right? So why do let our leaders continually convince us to keep playing by the same rules? "

We liberals need to make damn sure that what most offends us most about Rep. Ocasio-Cortezis is not that she is disrespectful and arrogant, but that she is who we pretend to be, but really aren't.

While Ronald Reagan pulled the wool over the heads of a large number of baby-boomers and GenXers, that is not the case with Millennials. It is high time that these folks see that they have earned the distrust of millennials.

Why should millennials trust those who voted for or did not fight vociferously against trickle-down economics that never trickled down? And after much pain, they helped elect a man of hope who did not fundamentally make enough change to the economy that allows them to strive.

How can an economy with full employment leave so many behind or under-employed? How can you not support pay it forward college when you are willing to subsidize corporations at every turn just for the promise of phantom or low paying jobs? How can you fight against Single-payer Medicare for all on the premise that we cannot afford it but can mobilize, capitalize, and finance a war at an instant? How can we talk about family values when we cannot even value families by supporting national family leave policies of substance.

This economy has failed because those who are now maligning millennials and our solid and knowledgeable young leaders who will no longer play a losing game like Alexandria Ocasio-Cortez have failed.

Dr. Eddie Glaude Jr., a Princeton Professor said it best talking about what Progressives and millennials are fighting for and whether it is plausible. He said the following.

I think part of what's happening is that the traditional spectrum of our politics has changed. Often times the categories, Progressive, Conservative, Centrist might not actually map on to what's happening on the ground. It's much more complicated, much more fluid.

I think the idea of expanding the pie and dividing the pie. " Most Progressives are thinking that the expansion of the pie involves the top one percent, the top one-tenth percent, taking all of the expansion. We have to address fundamentally that the economy is not working for everyday ordinary folk in a way that it should.