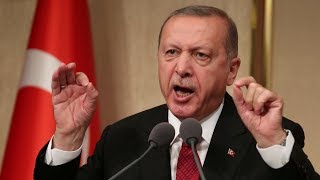 Last week I conducted a panel discussion about Turkey under the leadership of Erdogan. The day before the event, we were alerted that several of Erdogan's stooges will await us to disrupt the event, and we feared that violence may erupt. Earlier in the morning, NYU received a letter from one of the Turkish dictator's hawkish activists, warning that NYU should not hold such an event. We ended up hiring security guards to ensure our safety, right here in New York, from Turkish thugs operating at the behest of a despot who is leading his blind followers like sheep.

What's outrageous about this episode is that we here in the US, where freedom of speech and assembly are guaranteed by the constitution, are threatened by Turkish citizens who were given the privilege to live in our country. They are now bullying us not to engage in a discussion, fearing that it may turn out to be critical of Erdogan.

My panel consisted of three speakers: Professor Ahmet Yayla, Arbana Xharra, and Dr. Y. Alp Aslandogan. Yayla was a 20-year veteran of the counter-terrorism and operations department in the Turkish National Police and served as the chief of counter-terrorism in Sanliurfa, Turkey. He spoke with some painful details about his personal encounters with top Turkish officials, who instructed him to allow volunteers to freely cross the Turkish border to join ISIS in Syria and Iraq.

He witnessed firsthand how the Turkish government was clandestinely buying oil from ISIS, and how bribes from the proceeds changed hands to reach top Turkish officials. He recounted the arbitrary detention of anyone who was suspected of being politically active against Erdogan and the AK Party, and spoke about how more than 200 journalists were rounded up and imprisoned, and tens of thousands from academia, business, military, and judiciary were falsely charged with conspiracy against the state.

He was fired from his position because he objected to the government's deliberate policy of allowing volunteers to join ISIS, and was warned not to ever disclose what he had witnessed. He left Turkey for the US and was asked to testify before Congress about his personal experiences. Once the Turks learned about his testimony, his son in Turkey was arrested and spent one year in jail without any charges. After his release, he escaped to Europe and can never set foot in Turkey again.

Arbana Xharra is an investigative journalist from Kosovo. She wrote extensively on religious extremism and Erdogan's Islamic agenda in the Balkans. She was physically attacked because of her critical reporting and was hospitalized. In 2015, she received the International Women of Courage Award from the US State Department. Her account of what Erdogan is doing in the Balkans surprised many who could not believe Erdogan's extensive efforts to lure these states into his orbit.

She detailed Erdogan's investment in building mosques in the Balkans, which were designed expressly for spreading Sunni Islam, and his appointment of Turkish imams to ensure that the teaching of Islam is orchestrated to influence the young and impressionable. She revealed how Erdogan manipulates Balkans leaders and how he selectively invests in these countries to increase his influence by using Islam as a tool.

TIKA and Diyanet, she said, are Erdogan's main vehicles in the Balkans, where they built hundreds of religious institutions. Moreover, Erdogan made certain that critical assets -- airports, infrastructure, mines, energy distribution -- are financed and largely managed by Turkey.

She described how Erdogan's secret service kidnapped' early this year six Turkish nationals in Kosovo, suspected of having links to Gulen, and threw them in Turkish jail. Diyanet, though officially involved in promoting Erdogan's Islamic agenda, she said, also serves to spy on Turkish citizens who escaped from Turkey and Kosovar nationals who voice any opposition to Erdogan's meddling in Kosovo's internal affairs.

Dr. Aslandogan is a Turkish native who also escaped from Turkey, fearing arrest for his association with the Gulen organization. He is the Executive Director of the Alliance for Shared Values (AFSV), which promotes bringing together citizens of diverse backgrounds around shared values of humanity.

Dr. Aslandogan explained how Erdogan initially embraced democracy and embarked on impressive socio-political and economic reforms, making him the most respected and admired Turkish leader in and outside Turkey since Ataturk. But for Erdogan, democracy is like "a bus, from which you get off once you reach your destination."

From the onset, Dr. Aslandogan explained, Erdogan's focus on economic development provided him with a strong popular base on which he could count for political support, which allowed him to orchestrate the failed July 2016 military coup in order to purge any and all of his political opponents.

Aslandogan, however, remains optimistic that democracy may still return to Turkey, provided that four prerequisites are met: new leaders committed to freedom and democracy, focusing on education and offering a more liberal curriculum, developing civil society and concentrating on the building of democratic institutions, and finally, seeking Western engagement and further expanding cultural ties.

Related Topic(s): Brutality; Bullying; Democracy; Nyu; Oil; Rejep Tayyip Erdogan; Turkey, Add Tags
Add to My Group(s)
Go To Commenting
The views expressed herein are the sole responsibility of the author and do not necessarily reflect those of this website or its editors.