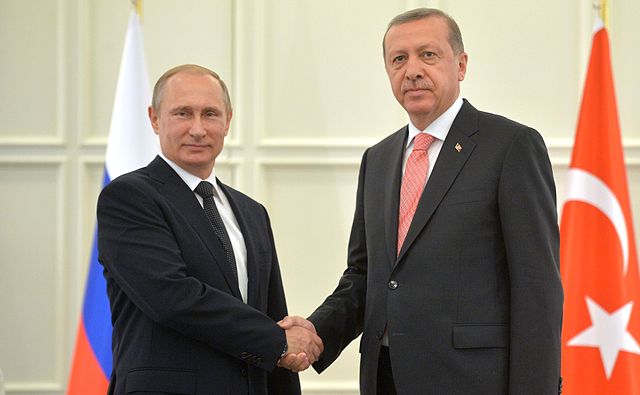 It was packaged as a stark, graphic message, echoing across Eurasia: Presidents Erdogan and Putin, in a packed hall in Istanbul on Monday, surrounded by notables, celebrating completion of the 930 kilometer-long offshore section of the TurkStream gas pipeline across the bottom of the Black Sea.

This is no less than a key landmark in that fraught terrain I named "Pipelineistan" in the early 2000s. It was built by Gazprom in only two and a half years despite facing massive pressure from Washington, which had already managed to derail TurkStream's predecessor, South Stream.

TurkStream is projected as two lines, each capable of delivering 15.75 billion cubic meters of gas a year. The first will supply the Turkish market. The second will run 180 km to Turkey's western borderlands and supply south and southeast Europe, with first deliveries expected by the end of next year. Potential customers include Greece, Italy, Bulgaria, Serbia and Hungary.

Call it the Gazprom double down. Nord Stream 1 and 2 supply northern Europe while TurkStream supplies southern Europe. Pipelines are steel umbilical cords. They represent liquid connectivity at its best while conclusively decreasing risks of geopolitical friction.

Turkey is already being supplied by Russian gas via Blue Stream and the Trans-Balkan pipeline. Significantly, Turkey is Gazprom's second largest export market after China.

Erdogan's speech, strenuously emphasizing the benefits of Turkey's energy security, was played and replayed all across a rainy, ultra-congested Istanbul. To witness this geopolitical and geoeconomic breakthrough was particularly enlightening, as I was deep into discussing Turkish geopolitics with members of the progressive Turkish Left.

Even the opposition to what in Europe is routinely defined as Erdogan's brand of "Asian illiberalism" concedes Turkey-Russia trade connectivity -- in energy, in the military domain via the sale of the S-400 missile system, in the building of nuclear power plants -- has been conducted with consummate skill by Erdogan, who is always careful to send direct and indirect messages to Washington that Turkish national interests will not be compromised.

Now juxtapose this developing entente cordial between the Bear and the (aspiring) Sultan with the gripping drama in Istanbul. Ibrahim Karagul -- never afraid to apply a Rabelais touch -- is always useful as a mirror reflecting the state of play of AKP circles around Erdogan.

For this political elite, a breakthrough in the Erdogan-conducted "Death By a Thousand Leaks" is imminent, allegedly proving that Mohammed bin Salman (MBS) directly gave the order for the killing and slaying of Jamal Khashoggi.

The consensus among the AKP leadership -- confirmed by independent Left academics -- is that the US-Israel-House of Saud-UAE axis is deep in negotiations to extricate MBS from any culpability.

That includes key items in the hefty Erdogan "package" dangled to the axis to essentially buy Ankara's silence -- an end of the Saudi blockade on Qatar and the extradition of Fetullah Gulen, described across the Turkish political spectrum as the leader of FETO (the Fetullah Terrorist Organization).

The Kremlin and the Russian Foreign Ministry are very much aware that the high-stakes game goes way beyond "Pulp Fiction" in Istanbul and the Astana peace process on Syria -- carefully micro-managed by both Putin and Erdogan alongside Iran's Rouhani. The big prize is no less than the leadership of the Islamic world.

There is nowhere better than a few stops in select landmarks of Ottoman imperial power, or a lively conversation at Istanbul's Old Book Bazaar, to be reminded that this was the seat of the Islamic Umma for centuries -- a role usurped by those Arabian desert upstarts.

Alastair Cooke has captured with perfection the House of Saud's close involvement in the slaying of Khashoggi and how this raises questions about Saudi Arabia's status as "no more than an inept Custodian of Mecca and Medina." This is indeed splashed all over the -- Erdogan-aligned -- Turkish media. And Cooke notes how this status "would strip the Gulf of much of its significance and value to Washington."

Related Topic(s): Islam; Islamic Jihad; Khashoggi Slaying; Kremlin; Recep Tayyip Erdogan; Vladimir Putin, Add Tags
Add to My Group(s)
Go To Commenting
The views expressed herein are the sole responsibility of the author and do not necessarily reflect those of this website or its editors.