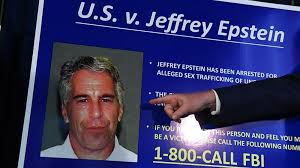 Sunday's New York Times carried a thought-provoking editorial by opinion writer at large, Charles Warzel. It was entitled, "Epstein Suicide Conspiracies Show How Our Information System Is Poisoned." The article lamented the power of Twitter and other social media to spread toxic conspiracy theories reflecting our current culture's worst "choose your own reality" tendencies.

According to Warzel, Twitter and other versions of social media have actually "outmatched" the power of the mainstream media (MSM). And this, to such an extent that an FBI field office recently identified fringe conspiracy theories as a domestic terror threat.

Warzel illustrated his point by focusing on Twitter's unfounded speculation regarding the Clintons' involvement in the Jeffrey Epstein "suicide" and on President Trump's role in advancing the theory. The editorial complained about resulting "dueling hashtags" with their viral accusations of foul play.

The unexpressed message of the Warzel piece seemed to be that conspiracy theories are bad in themselves and that one would do better to simply accept the more reasonable official story emanating from the CIA, FBI, and prison officials that Epstein actually did commit suicide as explained by those official sources. Fevered accusations of foul play are ipso facto unreasonable.

Others whose opinions have appeared in sources such as OpEdNews have made that point more explicitly. Forget exciting conspiracies, they cautioned, simply accept the boring reality that Epstein killed himself just as we've been told.

The point I wish to make here strongly disagrees. I contend that in cases like Epstein's mysterious death, conspiracy theories are not only good; they are inevitable and necessary. Additionally, the overwhelming power of Twitter and other social media to "outmatch" that of mainstream media represents the public's healthy recognition of the fact that the government officials and the MSM (like The New York Times) are no longer reliable. Their "official stories" must be presumed false unless otherwise demonstrated by irrefutable evidence. Such evidence will come to light not by internal investigations, but by full legal process involving (yes!) conspiracy theories, discovery and trial.

"Conspiracy" Is A Legal Category

My first point is to recognize the fact that the term "conspiracy" is not synonymous with fiction or paranoid fantasy. It is a legal term referring to the crime that occurs when two or more people plan actions forbidden by law. In other words, criminal conspiracies happen all the time. People go to jail for them.

In fact, "conspiracy theories" are routinely employed by prosecutors who use them to initiate investigations when such crime is suspected. Without lawyers' conspiracy theories, there would never be any criminal trials involving two or more suspects.

With such theories in mind, prosecutors gather evidence. Some of it is circumstantial or inferential (it's usually what sparks legal inquiry). Other evidence constitutes direct or "smoking gun verification. Juries and judges evaluate evidence of both kinds. When it is convincing beyond reasonable doubt (based on direct and/or circumstantial evidence), the legal system convicts conspirators and sentences them accordingly.

The bottom line here: It does not discredit a theory to call it "conspiratorial."

My second point is that the public has not merely good, but excellent reason to discount official theories about, well, EVERYTHING! Think about:

My third point is that there exists reasonable circumstantial and direct motive for suspecting that important people had good cause to want Jeffrey Epstein dead and that he may well have been murdered accordingly. Indication that Epstein had bribery-worthy information on important people is indicated by the facts that:

Related Topic(s): Blackmail; Conspiracy Theories; Crime; Evidence; Intelligence; Investigations; OpEdNews; Suicide; Trump, Add Tags
Add to My Group(s)
Go To Commenting
The views expressed herein are the sole responsibility of the author and do not necessarily reflect those of this website or its editors.