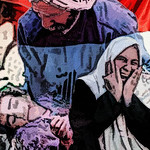 That was the refrain chanted over and over by the thousands of demonstrators who gathered to protest gun violence in America.

On March 24, 2018, more than 200,000 young people took the time to march on Washington DC and other cities across the country to demand that their concerns about gun violence be heard.

More power to them.

I'm all for activism, especially if it motivates people who have been sitting silently on the sidelines for too long to get up and try to reclaim control over a runaway government.

Curiously, however, although these young activists were vocal in calling for gun control legislation that requires stricter background checks and limits the kinds of weapons being bought and sold by members of the public, they were remarkably silent about the gun violence perpetrated by their own government.

Why is no one taking aim at the U.S. government as the greatest purveyor of violence in American society and around the world?

As journalist Celisa Calacal recognizes, "It is often the case that police shootings, incidents where law enforcement officers pull the trigger on civilians, are left out of the conversation on gun violence. But a police officer shooting a civilian counts as gun violence. Every time an officer uses a gun against an innocent or an unarmed person contributes to the culture of gun violence in this country."

The systemic violence being perpetrated by agents of the government has done more collective harm to the American people and our liberties than any single act of terror or mass shooting.

Violence has become our government's calling card, from the more than 80,000 SWAT team raids carried out every year on unsuspecting Americans to the military's endless wars abroad.

Indeed, the day before thousands of demonstrators descended on Washington DC to protest mass shootings such as the one that took place at Stoneman Douglas High School, President Trump signed into law a colossal $1.3 trillion spending bill that gives the military the biggest boost in spending in more than a decade.

With more than $700 billion earmarked for the military, including $144.3 billion for new military equipment, you can be sure this financial windfall for America's military empire will be used to expand the police state here at home.

This will put more militarized guns and weapons in the hands of local police and government bureaucrats who have been trained to shoot first and ask questions later.

Related Topic(s): Military; Police; Shooting; Shootings; Violence; Violence Prevention; Weapons, Add Tags
Add to My Group(s)
Go To Commenting
The views expressed herein are the sole responsibility of the author and do not necessarily reflect those of this website or its editors.